It took nearly 24 hours all told - not including the backups, which took 48 hours themselves - but I'm on Windows 7 now, and it's working fine.

One critical point: If you have a Realtek network controller (either a card or built in to your motherboard), download the Windows 7 driver for it from the manufacturer's site before upgrading, because your network will be seriously disfunctional afterwards.  The driver that ships with Windows 7 delivers only slightly better average speeds than dial-up - even on your local network - and frequently stops working entirely for several seconds at a time.

Is that Microsoft outsourced the job of writing progress indicators to a trained hamster.

And has yet to be replaced.

squeek keep in mind that chitter I only deliver the news. I do not make the news squeek

3 haha, I agree... The progress bar is really just a general guide rather than an absolute. The funnies tthing is when the progress bar makes great progress until its about 85% of the way through then slows down to a crawl. Talk about snatching defeat from the jaws of victory

4 Actually, the funniest thing is when a progress bar goes *backwards*, which I've seen a few times.  "Oops, sorry, didn't mean to copy that there."

This is the first time I've ever upgraded a Windows system.  Usually I'll hang onto them until they're old enough to need replacing or the operating system gets corrupted and dies.*

Nagi is a quad-core machine with 8GB of RAM, and until AMD's new Bulldozer chips arrive later this year there's no upgrade that's worth bothering with.  Not that I can reasonably afford, anyway.

So after carefully backing up 2.2TB of miscellaneous stuffs, I kicked off the upgrade at about 2 o'clock this afternoon.  It's just gone 9 o'clock now, and the status is exactly as I gave above.

It's not a quick process, not when you start with a 2.5 year old Vista system with 748 applications installed.

And it's telling me that The Sims 2 may not work afterwards.

Also my IDE controller, but I don't think that's even in use.
* Which has happened to me twice, both times due to memory problems of one sort or another.

Dear User Interface (And Other) Developers

Since the Minx user interface is entirely driven by the Minx templates, and completely user-configurable, I can't break it without breaking Minx itself, so I'm relatively safe from this disease.  But only relatively safe.

* Today I'm ranting about the "switch to tab" idiocy in Firefox 4, but it's always the same: Devs: Look at our great new feature!Users: We looked at it and we don't like it.  How do we turn it off?Devs: You can't.  You should love this feature.  All of us love this feature.  What's wrong with you that you don't love this feature?Users: You suck.  User X: Here's a patch that turns it off!Users: Thank you user X!
Devs: Why would anyone want to turn this feature off?  It's a great feature.  We all love this feature.  Oh, and anyone know why our market share is in free fall?
This problem is hardly limited to the Firefox developers, of course, or even UI developers, as witness the great swappiness=0 debate. Though I guess that was an inversion of the trope, with the users jumping with glee on a feature the developer thought was a bad idea.

1 I just installed FF4 and I do not see anything different in tabs. What is this about?

2 If you try to open multiple tabs to the same URL, FF4's awful bar will switch you back to the first tab instead.  I guess that could be useful if you had a hundred tabs open and had lost the one you wanted, but I'm much more likely to want to open a second tab to a site than I am to get lost in that way.

The real problem is that (a) you can't disable this behaviour, and (b) the developers appear think that the new behaviour is right for all people and all circumstances and shouldn't be disabled, ever.

3 That indeed seriously sucks. It's none of their business how many tabs I have open or what they point to. Man, no wonder you're peeved.

4 I just tested by opening 3 tabs to zaitcev.mee.nu. It works just fine, I have 3 normal tabs with the same URL.

5 OK, I suspect you are talking about selecting one from the history drop-down. It appears to be the one and only place where FF4 directs you to pre-existing tab. Any other navigation gives you a new tab as desired.

6 Yep, I should have been more specific.

7 They could've at least created a right-click menu with "open in new tab" or something.

After a little work to eliminate as many of the variables as possible, this is what I get. These scores are from my little Python benchmark, run on Fedora 13 under OpenVZ on my development machine, a 3GHz AMD Phenom II, and the main production server, a 2.93GHz dual Xeon 5670.

One tricky factor is that the Xeon 5670 can actually run at up to 3.33GHz when lightly loaded. I can't see directly what clock speed each core is running at, but by comparing results between busy and quiet times, and taking the best of ten scores for each test when the CPU was lightly loaded, I'm pretty sure I got a snapshot of it running at top speed, and the difference is about 7%. Intel's newer Xeons also have turbo boost, so I've left the numbers unchanged as averages measured on a moderately busy system.

When it comes to new server hardware, I'm projecting these scores to the Opteron 4180, a 2.6GHz $200 chip, and the Xeon E3-1245, a $280 3.3GHz chip. The Opteron clock speed is slower and the Xeon E3 somewhat faster than my test systems, making the difference much more significant. On the other hand, the Opteron has six cores vs. the Xeon E3's four. On the third hand, the Xeon has hyperthreading, which gives a small but measurable boost as well. All that means that the throughput is likely to be pretty much the same between the two chips.

And the Xeon E3 has a downside in that you can't put more than 16GB of RAM on it: It only supports unbuffered memory, and only four modules. Operon 4180 supports both unbuffered and registered memory, and up to six modules of the latter, so it can easily take 48GB. (More is possible, but requires more expensive high-density DIMMs.)

So the new low-end Intel chips will be measurably faster than the current low-end AMD server chips, about 45%, in response times if not overall throughput.

On the other hand, there's that 16GB limit. Memory is dirt cheap and you want to put as much of it in a server as you can, and being able to put three times as much in the AMD system is pretty significant. (Oh, and the Opteron is a dual-socket CPU, so you can easily scale to 96GB and a dozen cores if you want.)

The Psyco numbers are from my dev environment, and point out once again what a nifty bit of work Psyco is, and that it should have been rolled into the Python core years ago.

I missed my daily Billy action.

On my alt, anyway.

A little box from Sony just arrived at my door.  That was quick.

It turns out that the regular (as opposed to budget Classic) loops come in rather nice jewel cases.  It actually makes me miss physical packaging for music.  And games.  And stuff.  Not DVDs so much; DVD cases aren't pretty or well-designed, and I have twenty of them on my desk as it is.

I was expecting to post a mild rant (mild because I got into the problem myself, rant because they set things up so it was impossible to get myself out of it).*

So, well done Electronic Arts.
* Relating to one-use untransferable DLC codes, saved games that lock unless you have all the necessary DLC activated, the fact that you can't buy the same game on Steam twice even if you wanted to, and that with their purchase of Bioware I now have multiple EA accounts.

As Seen On That Site

It's possibly the least safe-for-work (safe-for-anywhere) site that anyone sane would have any reason to visit, but this was too cute not to repost. 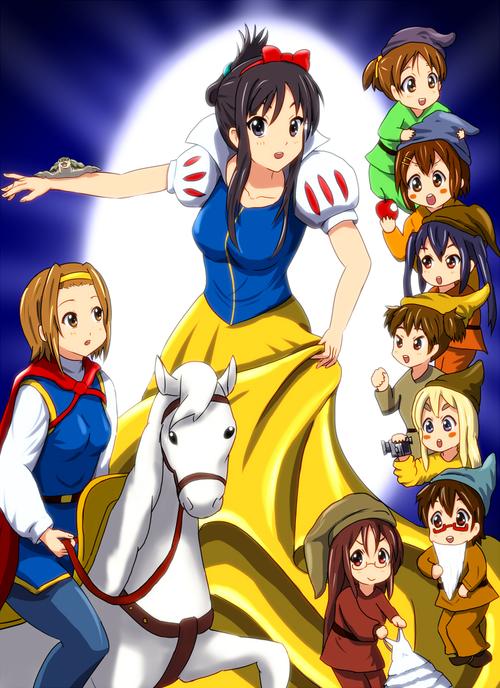 2 Very swiftly approved. Thank you for braving the depths of the Infobahn for our benefit.

3 Ton-chan got me confused for a while, as I thought it they possibly meant Azu-nyan. But no, it's very clearly Mio there, and Azusa is present among the dwarves.