Yeah, we're back.
I have an alarm set to go off when there's a site outage, but the alarm went down.

1 Pro tip: probably shouldn't have the alarm on the server that went down.

That Will Free Up Some Time 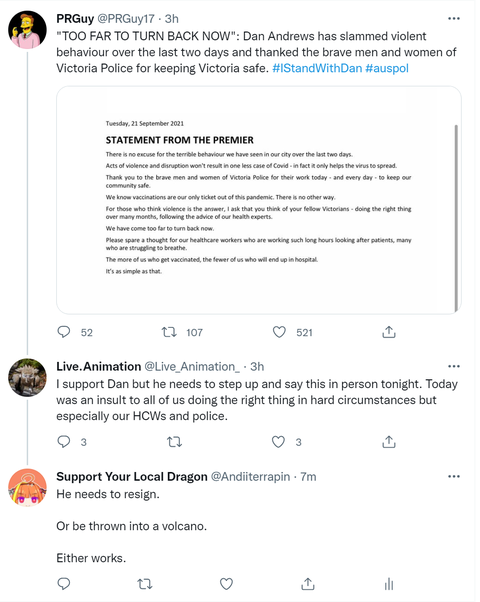 Yes, that got me banned.
Which I don't mind so much except that there is some content on Twitter that isn't garbage.

Update: Well, they've at least sped up the process in which a broken Perl script rejects your appeal.  Used to take a week.

1 Well, at least you didn't deadname anyone.

Server problem is getting worse.

Migration is today even if it kills me.

1 I'm not sure what death would accomplish, weblog-wise, that wouldn't be at least equivalent to server problems.  But then, your TLD is .nu which is close enough to Mu, which is basically an older version of Atlantis, so you're probably immortal and joking about dying here.
*crosses fingers, eats a clove of garlic, and shaves off his eyebrows for good luck*

This server is really getting on my nerves.  Cutover to new server this Sunday.  Should be less downtime involved than from a single one of these crashes.

Twitter Also In The Apiary Also With A Lead Pipe 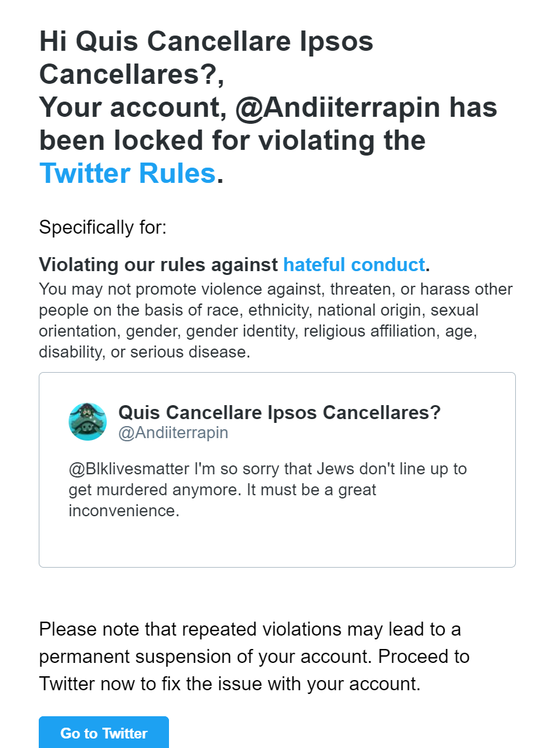 1 About your title/name text.
I thought is said "Who cancels the canceller?".
But I looked it up on Goggle Translate and it says "Who is cancelled, the chancellor."
I haven't taken Latin in 30 years...but I don't think Google is right.

2 In classical Latin it would mean "Who lattices the latticeworkers?" because the word cancel as we know it is a much later construction taken from the physical act of crossing out text, where the lines take the form of a lattice, and the Latin term for a lattice was cancellus.  Which in turn was taken from the word carcer for prison because prison bars are in that shape.

I personally translate it as Who will cancel the cancelmen?


(I looked all that up when I decided to use it as a Twitter name.)

There was a program called Words which was pretty good about telling you the grammar for the endings of Latin words entered, if they were in the included dictionary.  But the author died, the website to download it got taken down, and I'm not sure if any of the website interfaces is still around.

I actually don't remember what the -are grammar could mean, even though that was very early in my lessons.  -ares was beyond anything I learned, I think.

4 "Criticising people for siding people with terrorists"
Hands up, everyone who's suprised robots and/or the troglodyte woke "programmers" at Twitter don't understand sarcasm (possibly depending on who's being sarcastic).

Pixy Had Never Seen Such Fuckery

This latest thread from Bret Weinstein requires a response, because it is the most outrageous political commentary I have ever seen from anyone not already on trial at Nuremberg.

(Full text on Threadreader - though I'm not sure if it will survive if the tweets get deleted.)

First: Encouraged supporters to do what, Bret?  Peaceably assemble and petition the government for redress of their grievances?  Because that is what he actually did.

Second: Congress has neither the right nor the power to prevent him from seeking political office again.  That would be a violation of his First and Fifth Amendment rights, and the Tenth Amendment rights of the states and of his supporters.  It is not anywhere in the enumerated powers of the Senate, nor in the Constitutional procedure for the election of the president.

Third: Are you fucking kidding me?  That would require a show trial of a single day, and then you speak of avoiding political witch-hunting?

Fourth: No, the nation is not more important than any person.  The nation is the people.  Putting the nation before its own people is not merely the road to disaster, it is the disaster itself.


Fifth: Our focus on Trump is not unnatural.  We have not been drawn into anything.  That's you.  That's the Democrats.  That's the mainstream media.  You have been driven insane by your own irrelevance.

Sixth: If the Senate acts as you describe, it will be catastrophic.  They will be wiping their behinds with the Constitution, trampling every process and protection in the name of - in the name of what, exactly?  They will never be forgiven.

Eighth: This is not a pro nor anti-Trump proposal.  It is a fascist proposal.  You have explicitly placed the state before the rule of law or the rights of the individual.  You have determined that a show trial, without rules, without evidence, without opportunity for defense, is somehow just.

Ninth: And who, pray tell, has put the republic into a tailspin?

Tenth: The president's family?  Why would they need a pardon at all?

Eleventh: Beyond?  Beyond to where?  Just pardon everyone?

Fourteenth: Speaking for the world - which I do, I have a permit - fuck the world, if this is what it takes to "save" it.


The nation is divided between fascists and defenders of liberty, and you, Bret, have made it abundantly clear you do not side with the latter.

This is Weinstein's podcast.  I haven't watched it and don't intend to, but I will note that the comments are not kind.  Not kind at all.  And this is from his own viewers.

Update: And the savaging he's getting in the comments is apparently what remains after a purge.  I can barely imagine what the deleted comments were like.

1 I like the part where he invents Two Americas out of thin air: "convict and don't pardon" versus "pardon and don't convict". I'll bet he felt so clever that he stared at that sentence for at least five minutes before pulling his hand out of his pants.

b) I am reminded of the reasoning behind the distinction between the South African Bureau of State Security, and its replacement, the Department of National Security.  National security is the people.  State security is the likes of congress or Trump.

c) In my opinion, the controlling legal precedent is volume four of the collected works of Lincoln.  Violent combination too great to be resolved by the ordinary proceedings of court.  Trump is still president, and could legitimately call the militia to restore enforcement of law at anytime following the Georgia run off proof.

d) This is clearly a commie regime cheating its way into power, to be followed by mass murder.

e) This isn't Nixon-Ford.  Pardons will do nothing to keep Trump or his family alive.

f)  Charitably, the Democrats are desperate, and determined to push things.  DC situation smells.  If he isn't in on it, as someone with a career in making political comments, and without enough prep to go find a new career, he is probably nuts from the stress and confusion.

g) The problems are more complex than is understood by the people who are suddenly discovering that something urgently needs to be done.  They don't understand it well enough for a carefully designed simple solution, if any simple solution would work.

h) What we have is a breakdown in trust and consensus, with cracks that have been growing for a long time.  Hitting it with a hammer makes the cracks grow more.  The reason war will occur is that Biden and Harris don't have the temperaments to do anything but hit it with a hammer.  Bret's hammer is also a hammer.  Situation is not going to be restored to prior the lockdown hammerblow, or the most recent BLM hammerblows.  If a new stability occurs, it is going to be by a different mechanism than these grand hammerblows.

3 I am reluctantly coming to the opinion that the protesters who hounded Weinstein out of Evergreen College may have had a point.

Blog: Is very slow.
Me: Bans half a million IPs belonging to Tencent.
Blog: Yay!

Meanwhile, over at the idiot farm:

1 @jack "this" Oh, you darling retards and your untargeted relative pronouns.  I hope Trump causes y'all to hang out in a closet with your 41% friends.

Update: With Glenn Greenwald appearing as The Voice of Reason.

Dealing With Assholes Running Web Spiders On The Internet

Your site can deal with 20 simultaneous threads crawling the entire history of all your content right?  Right.  I mean, if your server crashes it's not our problem.  Also, fuck sending a clear identifier, we're just a Mac running Safari that just happens to be downloading the contents of 70,000 blogs.

Update: We were - and indeed, still are - getting hit by a torrent of garbage requests coming through a group of proxy servers run by an SEO company.  I don't know why, but they are now all getting 404.
Update 2: I killed that, and then I discovered we were also getting scanned by a total of 175 different servers at various hosting companies.  Those are all blocked at the firewall now, and don't even get the courtesy of a 404.
If you have a problem reaching the site - say it works on mobile but not at home, or vice versa - please let me know.  I will double-check the list of blocked IPs tomorrow and convert it to a smaller number of IP ranges.