My Rs Blew Off

Redis is cool.  Erlang is...  There are some really cool apps written in Erlang.

Edis is Redis in Erlang.

It's protocol-compatible (with a few caveats); that is, an application written to use Redis will run happily against Edis.

But it uses an on-disk, log-structured database (Google's LevelDB, in fact) rather than an in-memory datastore.  So it's not as fast, but it's not limited by the size of your memory either.

While I'm posting Youtube videos of stuff I'm slightly too young to remember, I sure remember this:

But I don't think I ever saw this:

1 I never understood how two brothers, supposedly reared together, ended up with different accents.

2 Oh, I remember them both. Television was certainly... something... back then, wasn't it?

3 Steven - Different accents?  They both sound American to me....

Greyduck - If by something you mean awesome, then yes!  Though Simon & Simon was one of my favourite shows of that entire decade.

4 One of them was California, and the other was Oklahoma-shading-to-Texas. To an American they're very distinctive.

Yeah, just kidding, even us Aussies can pick those out.

I don't know if those are the actors' natural accents or if the show did that to make the brothers characters more distinctive.  It doesn't make a whole lot of sense, but it worked.

6 Seems to be natural. McRaney grew up in Mississippi. Parker is from Maryland.

7 The spammer who is afflicting Brickmuppet right now has also been spamming me, which means he is logged in. (I've been deletinng the spams as they've been appearing.)

8 Roger that.  User will be EXPUNGED.

We're all familiar with this, of course:

But I'm apparently just a little too young to remember this:

Or, for that matter:

1 I desperately wanted the Rubettes version to be fake.

And it's a bargain at full price, if you like exploring and shaping new worlds, so at that price it's a steal.

1 Looks like they added a snow biome in today's patch, too...

2 Thanks for pointing out the sale--which is good for another 15 hours or so as I write this; I picked up a copy.  Now to figure out how to play.

3 1. Hit things with other things.
2. Talk to the guide, assuming he's still around.  Mine died and I his replacement got lost in the mail for days, which made my early experience with the game somewhat awkward.

4 I restarted several times, and from the little I figured out ahead of time I got houses built quick.
One thing i learned is you always spawn in the same place; I got killed twice when I started playing in what turned out to be the middle of the night.  Now I level off the area and build a house so I can spawn in safety.

So I was looking for something to do while my keyboard dried out* and this is what I found: The best explanation of what Terraria is about that I've yet seen.**


* I spilled my drink on it, after which it wasn't working terribly well, so I took it outside and hosed it down to get the sugary liquid out...  And now it doesn't work at all.  I'm typing this on the spare PS/2 keyboard I keep for when the BIOS decides it can't see my usual wireless keyboard.

** For values of "best" slightly skewed from normality.

1 That's cool how he stands in his bathtub, and all the sharks and jellyfish show up.

2 You mean that doesn't happen to you, Steven?  I can't tell you how many times I've gotten out of my shower and had to fight off random sharks and jellyfish.  It isn't usually a problem, except when I'm running late for work.

3 Just as long as you get gems and glow sticks out of it.

The Law Of Conservation Of Stuff

Doesn't apply in Terraria-land.  I rescued the wrench wench (the Mechanic) from captivity and can now start building fancy stuff.  I have a bomb factory (churns out a new bomb every ten seconds, very handy since they cost 5 silver coins each) and I just tried setting up a little fountain outside Pixy Base.

And turned it off before it flooded my house: More water comes out the outlet pump than goes in the inlet pump.

I can think of some interesting uses for that... 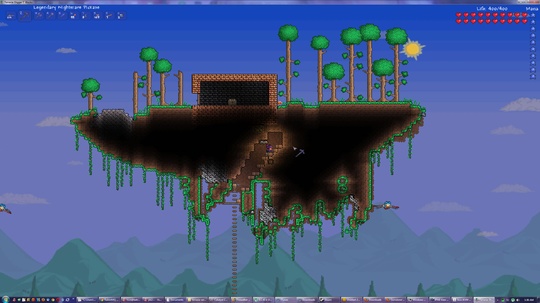 I tunnel my way up into my first floating island, cunningly avoiding the circling harpies... 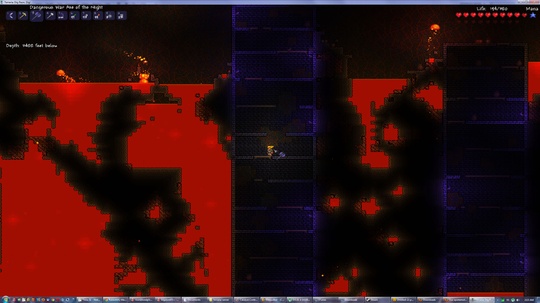 Tonight we mine in Hell!

1 In that first picture, who's the guy hanging onto a branch on the lower-right side of the island?

2 That's one of the harpies.  If you click on the picture, you'll get a (much) larger version.

3 If I had all those programs running at once, my computer would fall over, melt its way down to the earth's core and destroy the planet.

Full Purples And Sharked Up

Today I've managed to knock off the first two bosses (the Eye of Cthulhu and the Eater of Worlds), score a full set of Demonite items (sword, axe, hammer, pickaxe, bow, helmet, armour, greaves), and have enough ore left over from my mining expedition to afford a Minishark ("Half shark, half gun, completely awesome.")

For those who haven't played it, Terraria is what Nethack would be if it were reimagined as a 2D platformer around 1992.*  I haven't yet got to the neat parts where you can build mechanical widgets like the obsidian generator or the goldfish dispenser: I have to rescue the game's wrench wench from the Dungeon where Skeletron stands guard, and pre-shark, I got splatted fairly quickly.

Update: Twenty minutes later, Skeletron is no more.  What a difference full-auto makes!  Particularly if you're upgrading from an axe...

* Though it would have been rather impractical the way it's actually implemented - with a large world, the game uses around 600MB of RAM, which would have cost something like $20,000 at that time.

This is real code:

At least, it's real code if you are running RubyPython.

You can embed JavaScript in Ruby, and Lua in Python, so that gives you four languages in a single environment.  Five if you count CoffeeScript, which is a CoffeeScript to JavaScript compiler written in CoffeeScript.*

And you can of course chain things so that Lua can call back to Python which calls back to Ruby which calls a CoffeeScript function which you precompiled to JavaScript.**

Well, that and playing mining engineer, but mostly just dead.

1 Can you play it single-player?

2 You can. I've never played it multiplayer, for that matter. (Should try sometime, though...)

It's definitely more of an exploration game than Minecraft. Most of the building I do is on the lines of "I need this to get around easier" or "I want to fight the boss here" or "I'll grow my underground mushrooms here", instead of Minecraft's sand-castle-box feel. On the other hand, the game part is realized a lot better - durable equipment, and lots of it, means you're generally working towards a goal (i.e. "get better gear") and with a specific goal in mind (beyond "dig and hope I hit something good"). There's a few boss monsters and monster events, and a good variety of weird stuff.

Definitely worth what I paid for it.

3 I'm thinking of running up a mee.nu Terraria server - partly to experiment with Windows Server.

5 Thanks to you mentioning it to me the other day, Pixy, I've got hooked again. Gah! I've also not played multiplayer, but colour me interested if you get a server going.

NooooOoOo 12/9 (Fri - 8:25): Did you DG summon the AgentBrand? Because when he said last drop, he also said badger, so I was kinda thinking he meant the Frozen Rose. He also said it after the last Zenovia went down too...
Mappy 12/9 (Fri - 8:50): Anyone with The Beast, remember to get your Fresh Fruit today.
Cactusshin 12/9 (Fri - 9:09): No--it's just a freak coincidence. Once my WKai goes down, I plan on summoning Jasticus, Fayt, and Zenovia for my own ultra badger.

1 I read the words, but no meaning comes through.

2 I'm starting to burn out on Billy, I'm afraid... been there, done that, got everything worth getting, more or less. These days I just sign in when I want to play some hanafuda. Kind of sad, really...

4 I actually play the game, and some conversations (like that one) lose me totally.

7 Nope, Operation Get Wonderduck An Over 11000 was quite successful, and occurred well before EleventyEleven.  I've got a plethora of SNEs.  But thanks for the offer.

This post http://ai.mee.nu/what_i_dont_understand... has some interesting spam, including some from a couple weeks back.

The last comment was either lucky, or was tailored to the content of the blog, as it mentioned a specific anime, then plugged some product that was entirely irrelevant.

You have rather impressively persistent spammers.