Where Is The Update?

1 Man, did I need that laugh today or what?

The current XKCD amounts to the world's slowest animated GIF.*  It's a seaside scene that's been playing out for more than a day.

Now the sandcastle has a little bridge.
Update: There's a new XKCD up now, but the previous one is still going at the link above.
Update: Still going!  That is one fancy sand castle!

* It's actually handled server-side, and with a 256-bit hash for the filename so you can't look ahead, but...

How often are the images changing?

When I first saw it, it was just two people sitting. The roll-over text said "wait for it" and I assumed after a while that he was trying to be funny with that, since the title was "time".

2 Seems to be changing every 30 minutes.

The thread about it on forums.xkcd.com has a couple instances of people collecting the images as they appear, and making non-world's-slowest animated gifs, or other website widgets, from them.

It has outlasted the main page's update ("Time" was the Monday comic, the Wednesday comic is up now, and "Time" is still updating), so no idea how many more half-hours it will last...

4 When I saw it late Sunday night, it was just a guy sitting on a piece of ground.  I should have expected that he'd do something more than that... now here it is late Thursday, and I'm only now discovering that it changes.

My Kickstartled copy of Erfworld and accompanying red dwagon plushie arrived today. And I just discovered - before it was too late, for a change - this:
We need to get this to $1 million and hold him to that Jurassic Park pledge.

1 I wanna see a photo of that plush!

2 Here he is, along with my Pink Dwagon, guarding my backups: 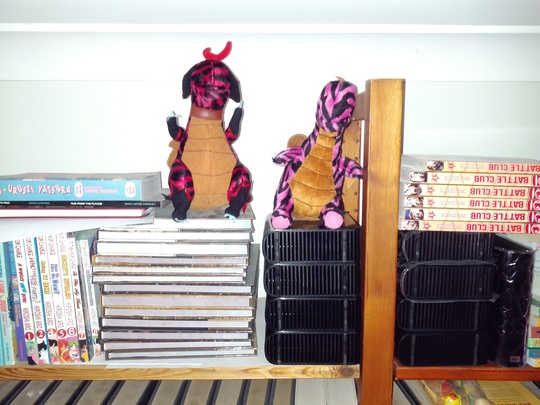 Not the best picture - I was testing the camera in my Nexus 10, and the hallway there is too narrow for a good shot.

3 You've got the Run From The Future TPB?  How cool are you?

4 Don't know if it outweighs the complete run of Battle Club.  Though Nausicaa is just off-screen to the right.

I have my Nexus 4 and 10 now, which gives me the full suite of current Nexi.

Quick impressions (and in the case of the Nexus 7, slow impressions):

Nexus 4: Fine size for a phone, but too small to do anything interesting with Android.  Good clear screen.  Haven't tried the camera yet.
Nexus 7: Possibly the perfect size for a tablet for reading, games, and many utilities, though too small for comics, text books, or comfortable web browsing.  Needs a faster CPU and a higher resolution screen, and a lot more storage.  I'd like to try an 8" tablet if one can be made with the extra size but no extra weight.
Nexus 10: Superb screen.  Just wonderful.  And the speed improvement over the Nexus 7 is very noticeable - everything is faster and more fluid.  Unfortunately, its size makes it heavy enough that it's annoying to hold one-handed for prolonged use.  You either need to use both hands (which makes it awkward to navigate the touch screen), or rest it on something.  Android's scaling works very well for the most part, though the vertical layout of the icon grid in the launcher is a bit off.
The Nexus 4 has a 4.7" screen; I think I want a 5.5"-6" device for my phone, and 8" for my main tablet; I'll know better after using these widgies for a few months, by which time the thing I want might actually exist.

1 Speaking of holding a tablet in one hand, you do not happen to know of a tablet that has a narrow bezel on 3 sides and a wide area on 1 side (on the "bottom") so that a person can hold it comfortably? I have a Kindle Fire HD in 7" format and its bezel is relatively wide all around. In the same time it's not wide enough and my thumb creates false touch on the front.

2 Sorry, don't know of one like that.  Bezel placement is certainly something that needs improvement.

In which Maxis/EA attempt to cover up their earlier lies with more lies.
At this point I'm getting a distinct whiff of class-action lawsuit drifting in from the ether.
Update: The reason I think this is important is not that SimCity is a bad game - that happens - or that the launch was a train wreck - that happens too.  It's that everyone knew it would turn out like this, and it would have been just as easy to do it right as to screw it up beyond redemption.  It's not the failure itself, it's the wasted potential that galls me.

1 Apparently always-connected "single-player" DRM is the wave of the future, and like EU membership votes, they're going to keep trying it (they think) until we give up.
I still haven't bought Diablo III.

Given Maxis/EA's repeated assertions that the reason SimCity 5 is restricted to online play only is that significant parts of the simulation are handled on the servers because the requirements are too steep for desktop PCs and it can't actually run standalone, coupled with the ongoing costs of providing such infrastructure, there were really only two views one could take: Either their engineers and project managers are deeply, deeply incompetent, or they're lying through their teeth.
So, what's behind door number two?

2 Huh.  Apparently the formatting doesn't quite work on Android-- only one word above should have been italicized.

Filed this under "Rant", but it's not my rant, it's by John Walker over at Rock, Paper, Shotgun:

[T]here was only one valid response from EA after the clusterfuck of SimCityâ€™s launch: capitulation. A full admission that the DRM that infests their game was needless, a bad mistake, and that theyâ€™re working to strip it out for single-player games as quickly as possible.

Claiming SimCity fixed, by removing the server queues, random crashes, lost cities, server drops, and the artificial restrictions placed on the game just to make it run, is like claiming a broken leg fixed because youâ€™ve mended the crutches.

That's just getting warmed up.  And some of the comments are downright harsh.

2 EA slowly fade into irrelevance?  Suits me fine, if they could just stop dragging great franchises down with them.

3 I sure wish they would, but when you realize that every story about how horrible the game is is full of comments by people who are going to buy the game anyway, or, like Fudds in the US, don't care, because it didn't affect them.

Speaking of Kickstarter, the Torment not-exactly-a-sequel is all well and good, but what of the games we all backed last year?  Wasteland 2?  Shadowrun?
Wasteland 2:
(Actual gameplay footage starts a couple of minutes in.)
Shadowrun:
Looking good!  The 90s are back, but in HD this time!