For Those Who Don't Care So Much About Benchmarking High-Level Languages Down To The Nanosecond...

Testing various libraries and patterns on Python 2.7.9 and PyPy 2.5.1

I listened to part of that, and the soloist (that guy in the middle) has an astounding voice. When he's singing in his falsetto he sounds like a woman, and for a while I wondered if he was lipsynching.

The guy on the lower right corner looks like he was built out of spare parts stolen from a cemetery. He just needs a couple of bolts sticking out of his neck to be complete.

I looked at their Wikipedia site and it said that their ambition is to be the latest successful a capella group. Which is a noble ambition, but I had to think about it for a moment.

Manhattan Transfer is gone, and Rockapella was never really much of a success, though they're still performing. So I guess the "successful a capella group" slot really is empty right now.

2 They should appear in an episode of Doctor Who as a 51st century pop group.  Probably would have worked better in Chris Ecclestone's time, but they weren't around then.

They look pretty different without the makeup.

And Now For Something Educational

1 Actually, I did just learn something: how "ankylosaurus" is pronounced. I've been saying it wrong my whole life.

2 I... I love this.  I love this more than I could have thought ever possible.

3 Wikipedia lists two different pronunciations.  I'd never heard this one before either.

1 You seem to have lost a month's worth of posts. (Including pictures of pretty girls.)

2 Caching glitch - back to normal now.

Pepsi restocked.  Back to work.

I just checked the fridge, and there's only one bottle of Pepsi left.  I might have to go outside.
Which might not seem to be much of an issue, except that where I live is smack in the middle of the biggest storm to hit the Sydney region in a decade.
Not the most violent, but in terms of covering a large area, dumping huge amounts of water over everything in sight, blowing down trees, and generally continuing to cause havoc for two full days so far, definitely the biggest.
I can't actually remember the Parramatta River (the main river flowing into Sydney Harbour) flooding before.  I'm worried about the Nepean River, which is where we usually get major flooding in weather like this.  (Miles and miles from where I live, but the one place we do get significant flooding in Sydney.)

2 But it's nicer if it's spread out over more time, I must admit.

3 Well, there's rain and then there's a foot of rainfall in 24 hours accompanied by 80mph winds.  That's not so good.

Right now it's stopped here, after 48 hours of constant heavy rain and high winds.  It's almost eerie how quiet it is.  From the weather radar it looks like I'm in a localised pocket of calm and the storm will be back by morning.

Channel Nine have some good photos and videos of the damage.

4 Found a report on flooding on the Parramatta River from earlier this year, which shows that I'm just not all that attentive.

But the picture there shows the same ferry terminal as the video above, except that back in January water was flowing from somewhere else across the terminal and draining into the river, where now the river itself has risen to flood the terminal and everything around it.

Does weather at your latitude blow west or east?

6 Weather moves from west to east over most of Australia, but in the opposite direction in the far north.  The result is that tropical storms will occasionally get stuck and wander south, sometimes as far as Sydney.

Very similar to the continental US and hurricanes tracking up your east coast, just with north and south reversed.

Perhaps the most subtly dramatic space photo I've ever seen. 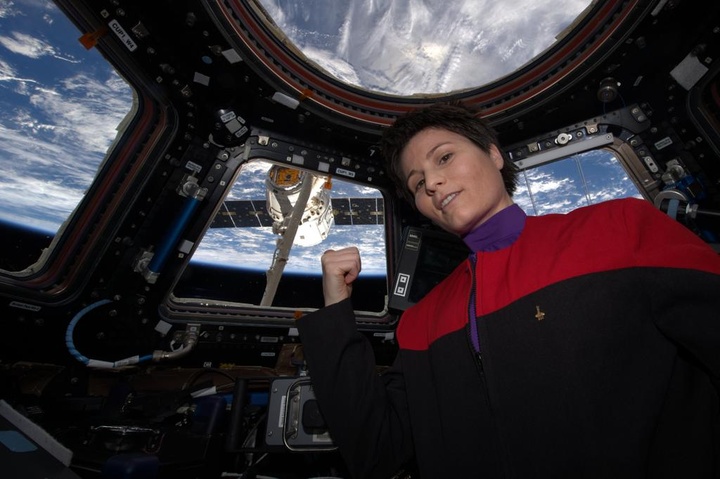 2 I will admit to only watching a minute or two but that seems more like Cities: Raillercoaster, no?