Eight years late, but finally here: A mainstream microprocessor that runs at more than 4GHz.

At its launch in November 2000, the Pentium 4 ran at 1.5GHz, but it did less per cycle than the Pentium III or Athlon, and wasn't all that great.  Particularly since Intel initially tied it to the overpriced and underwhelming Rambus memory.
In 2001 Intel reached 2GHz, in 2002 2.8GHz, and by 2004 3.8Ghz.
And there they got stuck.  Unable to increase clock speeds, they went back to the drawing board, abandoning the Pentium 4 for the Pentium III-derived Pentium M, Core, Core 2, and now the i3/i5/i7 family.
And eight years later, neither Intel nor AMD had reached the 4GHz barrier at stock speeds (not overclocked or turbo mode).  My new systems can reach 4.2GHz in turbo mode, but standard speed is only 3.6GHz.
IBM will happily sell you a 5GHz server if you have the money, but for mainstream systems, the AMD FX-4170 has the fastest clocks around.
Unfortunately for AMD, a slower clocked Intel i5 2500 will run faster for most applications, but I've been waiting a long time for this, so let me enjoy it for a little while.

I've wanted for some time to have better logos and logotypes, and if possible, mascots, for the mee.nuniverse.  Ideally I'd like to get a co-ordinated set of logos and mascots for each of the domains and system components.
I don't know if I can afford to hire a serious professional artist, but I can afford some commissions on deviantArt.  The problem there is finding the right artist, because there are a lot of them, and a lot of them are good.
I like this for mascot characters.  It's not exactly a chibi, but I think it strikes a perfect balance of simplicity and clean lines, wholesome cuteness, personality, and just a touch of sexiness.
For logotypes, this guy seems to have it together - clean, clear, and simple.
I don't know if any of my readers follow deviantArt, but if you do and know of artists you think would suit, and who are open for commissions, please let me know.

One of my favorite artists goes by the name Teru-chan. She has a DA gallery here.

Also Sheezy Art, Hentai-Foundry, and her home page. Plus she's got four collections for sale on DLSite.

I know she does commissions, but it may be tough communicating with her because her English is pretty poor, and you don't speak Japanese.

2 She's definitely talented, but her work tends to be a bit more risqué than what I'm looking for.

3 Allow me to suggest Weee, aka Raemz.  Though she's best known for her work on Katawa Shoujo, she's quite talented outside of that worthy game.  I've grown quite attached to her stuff.

Development of awesome 2D mining engineer training system Terraria has apparently ceased after the very welcome expansion late last year.  Two of the original three developers left to pursue other dreams and I can just imagine the feelings of the remaining developer, trying to meet the demands of a million (literally) fans.
Fear not, though, because there's a new game coming from one of the Terraria developers that is basically Terraria in space.  Terraria in space with penguins.
Starbound.
Update: More Starbound.

1 You killed it: Site Temporarily UnavailableWe apologize for the inconvenience. Please contact the webmaster/ tech support immediately to have them rectify this.

My Kittens Just Had Kittens

So, Double Fine, the game company headed by Tim Schafer (Day of the Tentacle, Grim Fandango, Psychonauts) has raised over $2 million on Kickstarter for a new old-school adventure game - five times their original goal, and still going strong.

This has not escaped the attention of other developers of classic games.  Brian Fargo (founder of Interplay, creator of Bard's Tale and Wasteland) plans to launch a Kickstarter drive very soon to develop a sequel to Wasteland.

If you're not familiar with Wasteland, it's the predecessor to Fallout.  Fargo didn't have the rights for a direct sequel, so the Black Isle division of Interplay developed Fallout as the next best thing.  Possibly the next better thing, because Fallout is a gem.
And Obsidian, the present incarnation of the aforementioned Black Isle, are also looking into the idea.  As Black Isle the team created both the original Fallout games, both Icewind Dale games, and Planescape: Torment, possibly the best computer role-playing game ever.  They're currently busy with a couple of projects - they do a lot of work-for-hire - but they have a lot of projects they never got to complete in the Black Isle days.
It's unlikely that we'll ever see the original vision for Fallout 3 or Baldur's Gate III due to licensing issues, and Torment was a massive project, with 800,000 words of text (about twice as much as Lord of the Rings), but a just-plain-fun party-based isometric dungeon crawler like Icewind Dale is something that likely could and would be funded through Kickstarter.
I loved the Infinity Engine games (Baldur's Gate I & II, Icewind Dale I & II, and Planescape: Torment) and if they were still making them today I'd still be buying them.  So if and when those projects show up on Kickstarter, I will leap on them, cash in hand.
Brian and Chris (Avellone, of Obsidian), you hear me?  However many of these projects you think you can deliver, me and my money are ready and waiting.

It's Not An Addiction!

I was browsing around Kickstarter yesterday, looking for cool projects to throw money at, and there aren't actually all that many that excite me, having already tossed cashbombs in the direction of Rich Burlew's Order of the Stick reprint drive and Rob Balder's Efrworld motion comic project.
One that did catch my eye, though, is The Adventures of the Salamander. It's a series of children's books based on a story the guy wrote when he was five, and recently found while going through stuff his mum had kept (as mums are wont to do). He's now a freelance artist and has illustrated a number of books, but this is the first time he's both written and illustrated something.
Unlike Rich and Rob, I don't know this guy and can't vouch for him, but if you scroll down you can see that he can sure draw some nice salamanders. I thought it worth a few bucks for a PDF set.

All the parts for Shana and Lina have now shipped, except for the black Lian-Li drive bay adaptors (convert one 5.25" bay to four 2.5" bays) which are expected late this month, and the Sapphire 7950, which is now in stock at the distributor and should arrive this week.  (Update: Shipped!)
I also added a Lian Li EX-503 to the mix - a little (7x9.5x10.5 inches) USB3/eSATA RAID array which nicely complements my existing Lian Li cases and gives me somewhere to put all my spare disks.
So Shana will be configured with a 4TB C drive, a 4TB D drive, and an 8TB E drive, all RAID-5 - something of a step up from the 1.5TB C and E it now has (with E mostly set aside for the daily backups).
All that remains is to cart it all home from the office and put it together.

I Liked It So Much, I Bought The Source Code

I mentioned in my recent post on InnovaStudio's Live Editor that while it was a great improvement on the already good Innova Editor, it no longer came with source code, which was now an extra fifteen hundred smackers.  In fact, that was the only thing I didn't like about it.
I think they may have been listening, because they just cut the price for the source license from $1500 to $600 - and then offered a 50% introductory discount on top of that.  Since that also includes another year of support and updates for the editor itself (which I was due to pay pretty soon), that's not too bad a price, and I paid it.
Another piece of software I was looking to license for mee.nu costs $24 for a single-site non-commercial license, $199 for a 100-site commercial license....  And $75,000 for an OEM license that would allow me to integrate it into Minx.  Nice though it is, we won't be seeing that one any time soon.

Luvit is Node.js for a language that doesn't suck.
Unless you carefully pronounce it as loo-vit, though, the name is pure cheese.

Given the runaway success of the Double Fine Adventure Kickstarter drive, I wonder what it would cost to produce new games like the original X-Com, Master of Orion II, or Master of Magic, with exactly the same gameplay but higher resolution graphics.
Or Syndicate, or Populous, or...  Ooh, Cannon Fodder.

1 A good example is OpenTTD, an open-source version of the classic Transport Tycoon Deluxe. (All the "X Tycoon" games came about because of TTD's success.) OpenTTD has quite a few improvements over the original, but you can turn them off and play it just like the classic TTD if you choose.

All I Want For Christmas...

Is a database with the structure support and low latency of Redis, the document support of MongoDB, the indexing of Lucene, the robust persistence and map/reduce views of CouchDB, the compact on-disk representation of Kyoto Cabinet, the datatype support of PostgreSQL, and the scalability of Riak.*
Just put a stamp on it and mail it to me, you don't even need to wrap it.
* I've been testing Riak for a new project.  Scaling from 1 to 10 threads, throughput grows by a factor of 12.5.  I can't explain it, but I'm not going to complain. 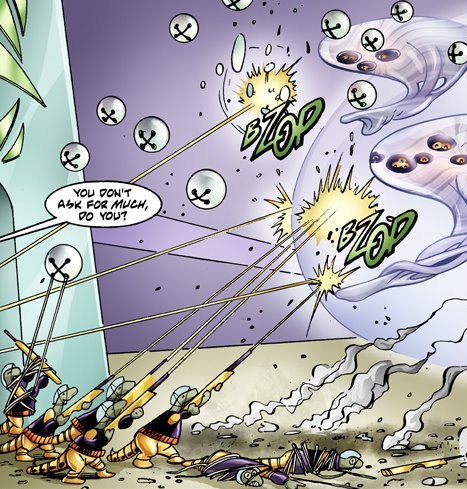 2 Yes, I gave up wishing and am writing my own.
PS: after the Preview the form lost the Name/Mail contents, so had to re-enter them in order to Post.