I just got suspended on Twitter for a week for comparing Brian Stelter unfavourably to a dead goldfish. 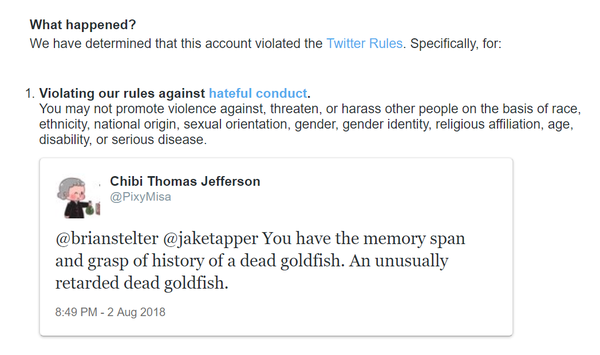 It seems that Twitter are saying worse things about Brian there than I ever did.
Also, side note, the Facebook user interface in a mobile browser is astonishingly awful.  MySpace cubed.
Also, another side note: If you log in to Twitter while you're suspended and accidentally click like, it appears they extend your suspension by five hours.

3 You could just say "stupid" and see if it skirts the edges of what I will loosely call "rules" of the banhammer.

4 Yeah, the R-Word is automatically detected, it seems.

5 I've had about 70 "lite" suspensions (where you get shadow banned but can still post) for using words like "idiot" or "stupid".  The two times I've been suspended for real were both for using "retarded".