Well, Don't Do That Then!

If You Build It, Give Me One

Here are the builds for the workstations I mentioned below.  Prices are US, from Newegg.  I did the Australian pricing at Techbuy - a lot more expensive for the memory, but quite good otherwise.

The Opteron config is more expensive - and slower - but includes 16GB of memory instead of the 12GB on the Xeon.

1 Just out of curiosity, what are you storing your just-under-1TB of blogs on? (I was just over at the mee.nu site) Some RAID array, I would think.

2 That's 1TB of bandwidth, not 1TB of stored data, fortunately!

Between mu.nu and mee.nu, we do more than 2.5TB a month in traffic, but there's less than 100GB of data in total.

We have two quad-core Xeon servers, each with 8GB of memory and a bunch of disks.  Rackmount servers housed at Softlayer.

On a whim, I just priced a dual-quad-Opteron workstation with 16GB of memory.

Scary thing is, I can afford it.

Whether it's a remotely sane thing to buy is another matter entirely.

Hmm.  Same store has the Asus Z7S and 4GB FB-DIMMs at a (relatively) reasonable price, which would give me 24GB of memory.  But I don't know if that board would fit in my case.

So that would be eight processors? You'd need a cooling tower for something like that. What kind of power supply would it need? Maybe a kilowatt? Good lord...

It really is amazing how prices continue to drop per unit compute power. The laptop I bought last year has approximately the same specs as the workstation I put together 6 years ago, but it cost a third as much and it weighs about a tenth as much.

2 The quad-core chips are server versions and are surprisingly low-power - about 75W each.  They're designed for datacenters where they stick 40 dual-processor 1U servers in a rack - and another 40 in the next rack...

They are a few notches slower than the top-of-the-line desktop chips, though - 2.1GHz for the Opterons, 2.33GHz for the Xeons.

The problem with the Xeon systems is that they use "fully buffered" memory, which is a power hog.  The modules have large heatsinks and sometimes even fans to keep them cool.  And they're expensive.

It's kind of moot, anyway, because it all changes when Nehalem lands in Q4 this year.  It'll run nearly as fast as current dual-processor/quad-core systems, and for a lot less money, and will support six memory sockets on a single-processor motherboard.  Unfortunately, it requires DDR3 memory, which again, is expensive, currently about twice the price of DDR2.  But at least it's faster and uses less power, where FB memory is slower and uses more power.

So realistically, I might get a cheap quad-core CPU now (Phenom 9750, probably) and save my pennies for a new system arounc Christmastime.

3 And yeah, performance scaling is back, after a few years where it didn't do so well.  So it's multiple 3GHz cores rather than one monster 10GHz core; fine by me.  I'm a server guy.  I love multiple cores.

And the desktop guys at least get their $200 1TFLOP video cards.

4 ok, I gotta see that spec sheet (and prices). can you publish it online? maybe on google docs? I cant resist knowing.

And Everything Old Shall Be New Again

Okay, so they screwed up the new Sim City.

All we need is another outing for Railroad Tycoon and a new X-Com, and you won't hear from me until 2010...

Oh, almost forgot!  While I'm reliving the 90's, there's a new Slayers series coming next week.  With the original writer, director, designer, and cast all on board too.  That should help me deal with the gap between the end of season 4 of Doctor Who and the start of season 5 of House...

I'm down again... or timing out.  Is there anything I can do to help short of blowing up my WP install?

2 Simcity Societies.  They wanted to create a game that would appeal to a new generation of players, rather than just people who had played the previous four releases.  They ended up with a mess that no-one wanted.

And sorry, you should be back on the air again now.  I see you already found the post.

3 I'll stick with SimCity4 and Sims2...  The next gen, Sims3, looks very much the same but I bet I'd have to upgrade my puter to use it!

4 Curse Blizzard. I'll need a new desktop at this rate.

The latest episode of Dr Who definitely has me eagerly awaiting the conclusion.

These Are Some Of My Least Favourite Things

Good News For A Change

Oh yes, since they were so nice to us, I'll give them a free plug: BigStockPhoto.

2 Link fixed now!  I thought that looked a bit odd.

Actually, I was meaning to ask you about graphic design software.  I'll email you.

Well, okay, I have a bit of mucking about to do with the template generator, but still, not bad for a day's work, eh?

Not So Delicious Flakiness

Then I did a bit of testing, and Minx wasn't its usual sprightly self, even though the system was mostly idle, so I decided to restart it.

It had been running continuously since February 24.

And yes, there have been code updates since February 24.  Minx allows for code updates while it's running live.

What that means is not only can the system run, non-stop, for four months, even through code updates, but that none of my updates broke anything.

Also, because there are multiple background processes (each multi-threaded) and a front-end load balancer, I can do a staged restart such that the system is up even when it's being restarted. 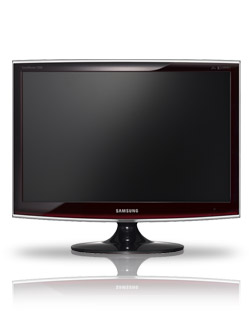 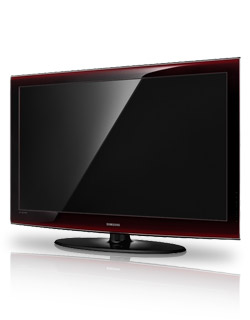 The TV's are already in stores in Australia, and the 32" model is about the same price as my 27" 720p from two years ago, and much much nicer.

There's currently a $100 rebate offer on the larger Samsung monitors here, and it looks like they're clearing stock to make way for these new models.  As soon as they arrive, I'm going to pounce.

Oh, and here's a shiny brochure for the monitors, and one for the TV's.

(One little thing I noticed is that the specs say that if you want to connect a computer to one of these TV's via HDMI, you have to use HDMI input #2.  This seemed unusually restrictive, so I poked around to see if I could find out why.  There's a real reason: Only HDMI input #2 provides separate analog audio inputs.  If your computer supports proper HDMI with sound, or you don't care about sound, you can use any of the inputs.  The TV also has digital audio out, so it can be used to switch the four different digital sources to your speaker system.  It also has ethernet and USB...)

Update: And this is the HT-X715 Home Theatre system: 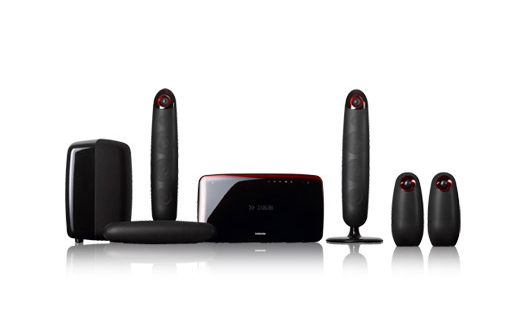 I have to laugh, because it's so designer-run-amok, but it does look good, and it does go together perfectly with the new TV's and monitors.  So I'll have one of those too, please.

I wondered why there was no T240HD; it seemed a natural product, since it can do native 1080P with no scaling.  Then I decided to Google it.

Yes Virginia, there is a T240HD.  On Samsung's Austrian website - but also in dozens of American online stores.  Samsung, you goofs.  There's also a T260HD, which would probably suffice as a TV as well as a monitor.  (UK site this time, not nearly as widely available online.)
* My current TV isn't bad, but has a grand total of zero HDMI inputs.  And it's "only" 720p, or more precisely, that weird resolution of 1366x768 which is popular with manufacturers for no apparent reason.

My current monitor isn't bad either, but it does have a 25ms refresh time (compared with as little as 2ms for these models) and I blew up the DVI input last Christmas.  Mainly it's only 19", and I'd really like something a little larger.  Like two 24" monitors side by side.

1 Those speakers have a certain "wide base to prevent loss" aesthetic to them that I'm not sure I want in my house. And they're looking at me.

I think the ones on the right are dalek eggs.

3 I was about to say that that hifi system looks like a squad of Totoro.

Or at least some very large dust mites.

My first thought upon seeing those rear speakers was "emo penguins."

Having looked at them for a longer time now, I stand by my thoughts.

5 Having eyeballed some of the Samsung screens alongside the new Sony Bravia XBR screens.

I think I prefer Samsung. Much sharper and cleaner images. Sony seem to have a sheen or fuziness to it.

6 Yes, I was looking at them in Bing Lee today.  Very impressive contrast levels for LCDs.

7 Just perusing the latest Myer catalog. The hifi that sees all is available and listed at $699.

I'm still waiting for the monitors to show up here, though.

9 The A6 series televisions are slowly filtering in.

10 Yep, the tvs are available in stores now, but no sign of the monitors even on Samsung's website.  Which is starting to get annoying, because they are available everywhere else in the world.

Last week's Doctor Who episode, Midnight, was an okay science fiction yarn.  But if you've read A Fall of Moondust you've already seen it.  And it had a hard act to follow in the previous story, Silence in the Library / Forest of the Dead.  Not bad, on the whole, but not insipired.

This week's episode, though, Turn Left, was awesome.

And if they did crib from Arthur C Clarke again, well, there are worse places to borrow ideas.

It's the first part in what promises to be a kick-ass season finale.

Just finished watching it, was pretty good but not hat original (Sliding Doors did the same thing 10 years ago).

Will we find the stars going out it due to some monks and an overgown pc though?

Next weeks does look awesome. (even if the 'get everyone back together for the big finale' trope is a bit overused)

Neat tie-ins to the previous three seasons as well.

3 Oh, and the opening sequence said to me: You need this in HD on a big-screen TV, not an AVI file on a 19" monitor!

That's not something you often felt while watching the original series!