Software For The Talentless Hack

I've been tinkering with RPG Maker VX Ace the last hour or so.*  It's a system for building old-school JRPGs - think Final Fantasy III or thereabouts.
It's got the usual tools you'd expect, like a tile-based map painter, event triggers, a database where you can define characters, classes, skills, monsters, equipment and so on, and a neat little character designer that creates a portrait and matching sprite like so: 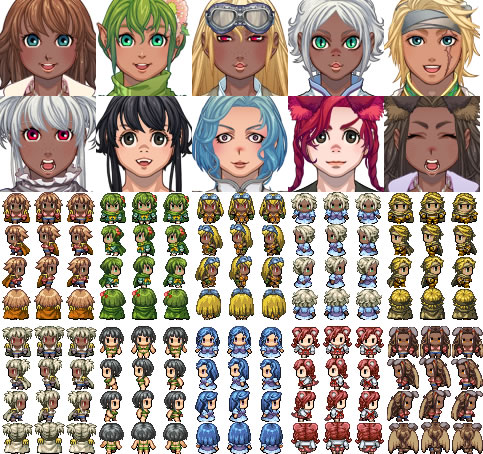 Yes, a winged bunny girl.
And it's programmable in Ruby.  It doesn't have the full Ruby standard library - for good reason, because that would make it too easy for games to mess up your system - but it has the full language and a useful set of game libraries.
If you don't mind the old-school graphics, it looks like it's a very flexible system.  You can alter all the standard character classes, skills, spells and so on to fit your own design, and anything you can't create directly in the game tools can be scripted in Ruby.
So if you're a programmer with no art skills to speak of looking at creating an early 90's JRPG of your own, you might want to give it a whirl.

* While waiting for a three failed RAID arrays to be repaired.

1 So when should we be expecting Pixy's Meenu: Travels Through Blogs & Space?

2 Depends on how many more RAID arrays fail, I guess.

The E5 2620 is the only dual-socket system, and is the most expensive of the three.  It also offers the best performance under heavy load - not surprising given the greater CPU resources - but as expected, lags behind under lighter loads due to the slower clock speed.
My performance model predicted a peak score of 3055; it actually outperformed that slightly, but I was pretty close.

Hadn't Thought Of That

If time travel is possible but causality still holds, then P = NP.

I have now been working for 21 hours straight.
Computers are evil.  Evil.

3 My only problem is that I'm out of ammo.

I am a computer technician with 25+ years of hands-on experience. I am able to save people a huge amount of frustration with their computer problems except people don't believe what I say.

I see it clearly because of my experience. Other technicians say I am wrong. They don't know what I know. Google the "floppy controller defect" that is a defect that Toshiba (and the rest of the computer industry concealed...lied about)was sued for knowingly concealing. It is consumer fraud. I can stop this planned obsolescence.

This message brought to you by the No, Seriously, It's Not an Addiction Council for the Promotion of Neat Stuff on Kickstarter.

Has anyone done a flowchart of cause and effect in this show?  A good detailed one, including the dinosaur wormhole and the white tulip timeloop?  I suspect it would end up looking like a map of the London Underground.

2 Good guess, but no.  There's a show called Fringe, which started out as a cheap X-Files knock-off, and turned into something other than else.

How much of the back story was planned out in advance I don't know, but it actually makes sense in a way X-Files never did.  For values of sense that are perpendicular to the usual kind, but internally consistent nonetheless.

The fact that there even is a back story is a bit of a spoiler, since you don't know any of that going in to the first season.  But I think the first season would be easier to get through if you went into it knowing that things will eventually connect together; going in blind it's a bit too monster-of-the-weekish.  So it's a good spoiler.

3 The payoff for the backstory looks to be finally coming together. Although I need to catch up on the last few episodes. This appears to be the anti-Lost in terms of backstory.
Not that I watched Lost.
Last season, the rift war pretty much kept a single storyline running through most of it. This season is a lot looser, I guess due to the ending of the rift war. Spinning variations on its own cases to  play with Olivia's memory.
The characters have always been what drew me consistently and have kept me coming back. Especially Walter.
BTW I was setting up ssh access to do some work on my wordpress setup. Was wondering if the demon is on a nonstandard port as I think I've setup the DSA keys properly.

Midori has now been set up.  Benchmarky time!

Midori is a 2.1GHz Opteron 6272; two dies on a single package, each with 4 modules with 2 cores each but with some shared resources, for 16 physical cores, and turbo mode up to 3GHz.

The Xeon E3 core is more efficient than the Opteron core, as well as running at higher clock speeds.  But the Opteron gives four times as many cores at a very modest price.

Let's see how they run for single-threaded applications, moderately-threaded ones, and then huge horrible messes of applications.  These scores are aggregate throughput on my little Python benchmark.

Things are pretty much as expected up to four threads; the higher clocks and stronger cores on the Xeons outrun the Opteron.  At eight threads, the Xeon delivers a better than expected result from hyperthreading, but the Opteron delivers an 80% scaling factor and outstrips the Xeon.

At 16 threads there's no improvement for the Xeon...  But there's not much from the Opteron either.  At 32 threads there's little change.
So...
The Opteron is 25% slower for single-threaded applications, and 30% faster for multi-threaded ones.  The performance at 16 threads is disappointing; that's probably due to a combination of the lower clock speed when all cores are active and the shared resources between core pairs.  In fact, the performance gained by the extra cores in the Opteron is less than the gain from hyperthreading in the Xeon.  That's a surprise, and one I hope AMD can address in future versions of the chip.
But it supports four times as much memory, so it's a much better chip for large servers.
A dual Xeon E5 2620 (the other option I was looking at) would be as much as 40% faster, based on these benchmarks, but it would also be about 40% more expensive (for the same amount of memory and storage). And - here's the tricky part - up through 8 threads it would offer no advantage at all.  A dual E5 2620 would offer 12 full cores vs. 8 dual-core modules, but its lower maximum clock speed would offset the stronger architecture, and it would offer no performance advantage until you get beyond eight threads.
A dual Opteron 6272 would be about 40% faster again - at least, for heavily threaded workloads - and at the same price as the dual E5 2620.  But I've decided to go for dual servers once we get to that point.

The Grim Dawn project on Kickstarter is doing okay - they're up to 44% after three days - but I want to see them at 440% so they can make the game extra double awesome.
If the idea of a slick steampocalypse action RPG appeals to you, hop on over and sign up. $18 gets you the game, DRM-free, and a sense of smug self-satisfaction for sticking it to the lizard.  It's from some of the creators of Titan Quest, which I picked up for $3.74 on a Steam sale and then played for about seventy hours.*
Do it. You know it's right.
This message brought to you by the It's Not an Addiction Council for the Promotion of Neat Stuff on Kickstarter.
* In the game, you walk from Greece to China.  This takes a while.

One Door Closes, You Know The Drill

Wasteland 2 is safely under way with nearly $3 million in hand (actually, just over $3 million counting separate Paypal contributions).
And the long-awated Grim Dawn, from the team that created Titan Quest, has just launched its own Kickstarter project.
Plus, the Shadowrun project is still running, comfortably over a million dollars and going strong.
Oh, and there's an intriguing post-Ragnaroktic role-playing/turn-based-strategy game called The Banner Saga closing in the next few days.
Of course, the first of this generation of big crowdfunded game projects only launched two months ago, so none of them have actually delivered anything yet, and it's possible they could all fall short of their promises even as they are funded beyond their goals.  But given what a mess the existing game publishing industry is making of things, that would still be better than the status quo.

Just placed orders for two servers with ReliableSite.Net:
Midori
Kurumi
Midori will be main server, with Kurumi handling backup, logging, and monitoring tasks.  Depending on how things go, I might end up adding more small servers like Kurumi to act as the web servers while Midori handles databases and applications.  Everything is virtualised, so it will be easy to migrate tasks between boxes.
This is a very cost-effective solution too; it's about the same price as one Xeon E5 server, but gives me more CPUs (on the Opteron), faster CPUs (on the Xeon E3), more total memory, and a lot more disk space.
Really looking forward to getting these up and running.

1 Are you going to have to visit the US, or can you do it all remotely?

2 All done remotely.  It costs a bit more to rent servers and have someone do all the hardware stuff, but it's a hell of a lot easier.