Planning to get a new computer next year. Rough specs - subject to a lot of change.

That's a really high spec, but I want to put it under my desk and then not touch it for the next four years. So I'm strongly considering not having an internal hard drive at all, because the iron rule of computing is that hard drives fail.
I already have three 4K monitors - the two Dell desktops have HDMI input, and I have a Samsung 4K TN monitor - so I can replace the monitors at any time, not necessarily when I buy the system.  As long as my video card has two HDMI outputs, anyway.

And I can buy the SSDs now and put them in the Dells until I'm ready to do the rest of it.  Can't do that with memory unfortunately, since the Dells use SO-DIMMs.
It will be named Korone, to honor the doggo who just hit a million subscribers.

Honestly I could halve everything and still be pretty happy, but I am going to be running VMs, databases, cryptocurrency nodes, and all sorts of other crap on it, and expecting it to run games smoothly at the same time, so it needs to be overkill.

Or...  I could just buy two smaller systems.  I guess.

Update: Thinking about it, two systems makes more sense.  One Windows and one Linux.  Probably just with the 5600X and a 6700 XT or whatever they come up with on the Windows system.

Let's see what reasonably-priced motherboards are available with faster than 1Gb Ethernet...  Well, if I wanted to stick with ASRock, the answer is none.  Better off getting a couple of 10Gb cards rather than paying nearly as much to upgrade to a motherboard with integrated 2.5Gb.

Not At All Tech News

Terraria Video of the Day

Since when was there a mini map? Since when were there minecarts? Okay, yes, it's been a while.

Coco is eager to get a multi-player server set up and drag the other girls into this. I'd love to see them battling the various bosses together, because it would be complete chaos. They can't even ride a virtual roller coaster without multiple fatalities.

Update: Someone clipped and translated yesterday's Death Coaster insanity.  This is just a few of the highlights, I counted at least six fatal falls while I was watching.

Three of the HoloEN girls were streaming Left4Dead, a four-player game.  Calli had a recording session and Kiara had a collab with one of the HoloJP members, I think.

Since leaving a slot open would allow random people to join the game, the HoloEN manager joined in - and turned out to be the MVP.  Fans quickly dubbed her Enma (EN manager). 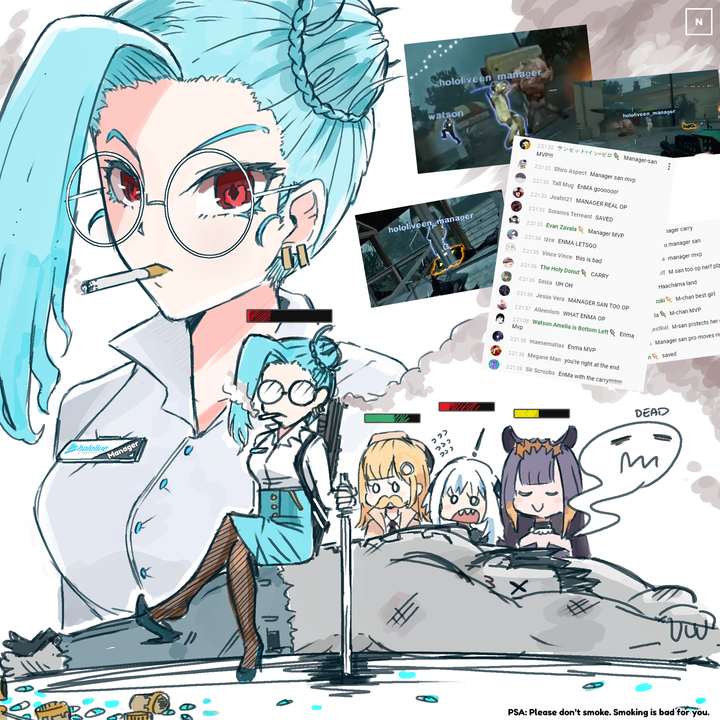 Enma is also the Buddhist god of the dead, so it fits perfectly into the Holomyth theme.

Disclaimer: She is Calli's boss, after all.

1 >hard drives die I just had a (two-year-old) 970evo ssd go "blerk" and completely disappear off the bus.  If I put in in a USB enclosure, it takes about 5 minutes to enumerate, and it shows up as a 0GB drive with a sector size of 0b, and all the id strings are also easy to read zeros.  I guess I could put it in a RAID-0 using a stripe size of zero and see how it performs.

2 Yeah, we had a high-end PCIe MLC drive do exactly that at work.  One moment the server was chugging along, next moment BIOS didn't recognise it as a device.

3 It's been a long time since I've put anything other than an ASUS motherboard into a PC I build, but that ASRock sure looks nice.
When I bought my current 27" 4K monitor, I built an SLI computer to drive it, GTX 970's if I recall. Do you really think a single card can usefully drive THREE 4K monitors?

4 The multiple 4K monitor setup is for work - I have two 4K screens right now and it's not enough.

If I end up playing games across multiple screens I'll be fine dropping back to 1080p for that.

5 > Swarms of tiny self-assembling robots. What could possibly go wrong?
I just lost a game of Stellaris by releasing a classic gray goo, so this is just the kind of thing I want to see people working toward.

6 Having not played Stellaris, I don't know what the result is.  Did you lose because the goo ate you first?

7 I'm not familiar with Stellaris, but if I were designing a game with "grey goo" as a possibility, I would definitely make that a universal losing condition.  (Assuming we're talking about the same stuff.)