There are no good small project cases.  They're all garbage.
About the smallest size you can get a nice looking case is mini-ITX.  Something like this: 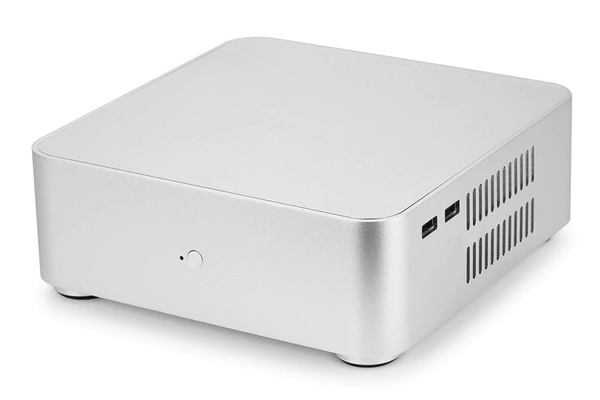 That one is A$70 from Amazon Australia, nearly as much as the entire rest of my BOM including a four-layer mini-ITX sized board and PCB assembly in qty 20.  Some of them run about US$25 each on AliExpress, but the one I particularly like with no visible screws is naturally among the more expensive.
It's so pretty I'm not even sure I want to drill a dozen holes in that front panel for the LEDs.
I also started on a BOM for the A1250, the version with the Renesas RZ/A1 and 3MB internal RAM instead of 1MB.  It uses many of the same components, but adds about $12 for more powerful CPU, supports DVI, adding another $12, and a lot more flash storage and a RAM expansion option, totalling another $12 or so.

Board and assembly costs are identical - because it has only three more components; it just uses more expensive components - about $20 in qty 20, falling to $8 in qty 200.

Ouch.
* The A1750 would run about $185, so I'm not even thinking about that at the moment.**
** On the other hand, I've found that I can get the RZ/A1M from Avnet for about A$6 more than the RZ/A1LU, and it's a much better chip.  Instead of 3 graphics planes, it can produce a total of eight.  Normally those would be across two screens, but that magical FPGA retimer can fix all that.  Might need to bump it up to have more pins if it's acting as a video crossbar as well as a scaler though.

1 I liked the idea of HyperCard, but quickly grew to hate the HyperTalk language; ambiguities in the parser turned "English-like" code into insane word salad.

3 "Try to turn English into a programming language, and end up making people type 'get line one of card field short name of the target'"...

4 The two most difficult parts of my beer scale project have thus far been: finding a project box that fits between the upper and lower platform, and finding suitable mounting hardware to fix the load cells in between the platforms.
Electrical design is easy, mechanical design is hard, I guess? At least at hobbyist scale.