I mentioned in my Winter Wrapup that AMD graphics cards have become almost impossible to find, because they're all being bought by cryptocurrency miners.  If you live somewhere with reasonably priced electricity, the pay-back time for a Radeon 570 or 580 is about 3 months, and getting shorter as the currencies increase in value.
nVidia's cards are less efficient at mining, but they're still more efficient than an AMD card you don't have, so the GPU blight is spreading.  A couple of weeks ago, the GTX 1070 (a very nice card) was readily available.  Now: 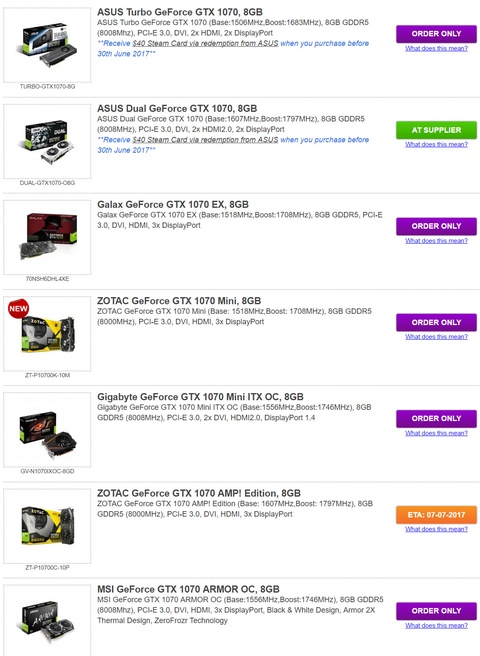 If this keeps up, the Xbox One and Playstation 4 will be next to go - both have AMD GPUs.

2 No wonder the shelves at Frys were completely empty of AMD cards last week. I thought maybe they'd reorganized the shelves and put them somewhere else.

3 I'm going to be building a new desktop soonish.  Fortunately I have a GTX 950 squared away, from the current desktop, which got a new RX 480.

of DDR4-2400, and a 480GB Patriot NVMe M.2 SSD.  For the moment it's got an R7 250, but that's going to be replaced with a GTX 950 when I get a power supply that's big enough. Borrowed a mid-tower computer from work that wasn't being used, with the plan of getting a uATX mobo, but there was a better one for not much more.  Got it home and noticed it was a full-sized ATX, so it won't fit in the case.  Had to remove the PSU and front-panel switch from the case.

Oh, Windows 10 on a USB3 stick.  From boot up til the password prompt, about 9 minutes.

I'm planning on getting either a Ryzen system later this year.  Either the 1700,  or the cheapest ThreadRipper if the price is reasonable.  I don't really need that much power, but it would mean I could hang onto the system longer without running into limits.

6 Thinking about a Corsair Crystal 460x with front- or top-mounted 240mm AIO watercooling, not sure of what kind yet.  Right now it seems to be idling about 50C, which seems high.  Possibly I didn't do a good enough job on the TIM, or the 1600X has the 20C offset thing so it's really only 30C, I'm not sure which yet.  I'm also considering returning the motherboard for the next step up (gaming 3) which has significantly better reviews on Newegg.

7 As Seen On Reddit:  "Set your voltages manually. I had my 1600x (running stock) on auto and the motherboard decided to yolo voltages all up to 1.45 quite often causing high temps on a cooler made for 130w TDP"

And yeah, the advice from AMD is to keep long-term voltage to 1.35V or less, both for reasons of heat and for the longevity of the CPU.

9 Looks like.  The BIOS and Ryzen Master both show idle temps more like 30C.
I haven't touched the voltage yet.  Ryzen Master shows it running from about 0.84V at idle (typically all 6 cores @ 2200MHz) to 1.375V when gaming, to 1.48 or so at full utilization, say Prime95.
Thought I'd try undervolting a bit but my motherboard's bios settings for that are limited, another reason to consider swapping it out.  The highest performance it'll do at stock settings seems to be 3 cores at 3.7GHz and the rest somewhat slower.  I picked up a 500W EVGA PSU so I could put the 950 in it.  Ugh--the PSU fan runs at 0% or 100%, it seems, mostly the latter, even with the thing mostly idle, and it's LOUD.  Need to find something quieter.

10 I've found Corsair power supplies to be good, even the relatively cheap ones.  Been using them for about 10 years now.

11 Probably going to get the Corsair RM550x.  Supposed to be quite good, and also quiet.  I have a CX450 (430?) in another computer now.  Generally I've been happy with their stuff.
I got HWINFO64 this evening.  I've seen up to two cores at a time hit a 40.75 multiplier, what's a much more typical "max" is 37.0.  A bit annoying, but still pretty fast.  Right now I have no case, and the hottest I've seen the CPU report is 55C or so while gaming, not counting prime95, etc.
Still on the fence about replacing the motherboard, because of the limitations of Ryzen overclocking (specifically, the loss of all clock adjustments), but if I do I'll probably go with the ASRock Taichi--possibly it'll clock up a bit better, but if not, I'll live.

12 Got the Corsair PSU -- very nice, fan doesn't even come on while gaming, although I haven't done a stress test. Taichi motherboard didn't like the Geil RAM I bought, though--the computer booted once, then refused to boot with POST codes 54 and 55.  I finally got it to boot with one stick, in the wrong slot, but when I tried to reboot for a BIOS update, it wouldn't boot again.  Sigh.  I guess it's back to the store tomorrow for something on Asrock's QVL.  AM4 motherboards are famously finicky about which RAM they take.  The cheapest stuff Micro Center has that's on the QVL is $40 more than the Geil stuff I got, or $20 more, if Micro Center will price match Frys.  Very annoying.

13 That's weird.  Standard memory clocks?  AM4 is finicky about overclocked RAM, but at standard speed everything should work.

15 Gave up.  With the new RAM, it still wouldn't POST, so I returned everything.  Not sure what I'll do now.

17 Am giving serious thought to this Best Buy CyberpowerPC model.  There's a store that should have one in stock about a 15-minute drive from the office, so I am inclined to pick it up on the way home today.  I can always return it if it's junk.  It has a lot of good reviews on their site, and some good Youtube reviews.  $650 for a 1400 and a 4GB RX 580!  I wanted the hex-core but the quad will probably meet my needs.  The biggest problem people seem to have with it is they plugged the case fans into the Molex connectors on the PSU instead of going with motherboard PWM connectors, which makes it loudish.  I heard one at idle in the store, and the noise was louder than I'd like but not really loud, at least not over the store noise.  And the fix won't be very expensive, even if it means replacing the fans.
Oddly, they replaced the stock Wraith cooler.

19 The assembly was competent if not stellar.  I moved one of the two case fans from a Molex connector to a motherboard one, not that it probably makes much difference as it's a 3-pin, but it turns out it's not the long pole in the tent anyway--the noise is coming from the Cooler Master fan/heatsink they replaced the stock Wraith with, which uses a 3-pin connector as well, so it runs at 4K RPM.  Obviously this means I need to replace it. Overclocked from 3.2 to 3.4 with ease, and seems to run fine.  From what I'd read, OC on Ryzen disables all power management and all the cores run at max speed all the time.  This appears not to be true.  I watched Ryzen Master report various cores bouncing between 1550, 2800, and 3400MHz.  This is pretty promising, so I'll see how it goes and see how much headroom I have.

I know I don't really need to but I'll probably replace the HSF with a 120M or maybe 240M AIO.

21 That sounds like a pretty good deal.  Much less messing around for you, RX 580 is a great card, and you can always upgrade the CPU later if you need it.

From the looks of things, Zen 2 next year might be a 12-core part, which will push down the prices on the 6 and 8-core versions.  And Zen 2 and Zen 3 will still use the AM4 socket, so you've got plenty of upgrade room.

22 With a new, larger CPU fan (with PWM!), I can do a bit more serious work overclocking.  So far, 20 minutes of Prime95 @ 3.6GHz is leading to temps around 49-51C, with a core voltage of  1.2375 and a NB of 0.91V.  Without the slight voltage tweak, I guess the voltage was too low and it simply powered off--very nice!  No apparent danger of damage, temps hadn't gone any higher.  (With the crappy HSF it came with, it was hitting around 53C before crashing.)

23 Of course it crashed right after that, but it made it 25 minutes with about 52C max temps.  I bumped the voltage up another notch, and will try a longer test tomorrow.

24 Sounds good.  That voltage is still pretty low, so you likely have some headroom there.

25 Yeah, I expect I'll have to raise it some more.