I Bought A Bed

Apparently they're quite popular.

1 No more dangling in a sleeping bag hung from a hook in the closet?

2 But everyone that says that is lying.

We've got an all-new kind of spammer. You just got hit by two of them. Brickmuppet (as always) got hit twice, too. In this case they may even be getting done by hand, but they always end with a google keyword and a link. (In the case of Brickmuppet it was "top 10 movies". Ah, I see that he got hit by your guy, too.)

They never rest, do they? Even though the site has "nofollow" for every link in a comment, so that they get zero SEO boost for their effort.

5 They all came from the same IP, so deleted and banned.

7 Pixynator, I have a question for you.  I'm tired of seeing imbedded youtube viddys on my blog that are teeny-tiny lil' things.  Is there some setting I can change to make one 640xWhatever?  Or am I stuck the way it is?

8 Also having a little trouble here. Hit the "upgrade to 1.1" button, whoa style change! I can deal with that, but how do I replace the banner at the top? I banged together a banner pic I can use for the time being, but I can't get the page to actually USE it, even though I set it to do so under "Styles". What am I doin' wrong here?

9 Wonderduck, yes, I should be able to do that.  Let me see what Youtube's latest embedding code looks like and I'll try to patch something together. 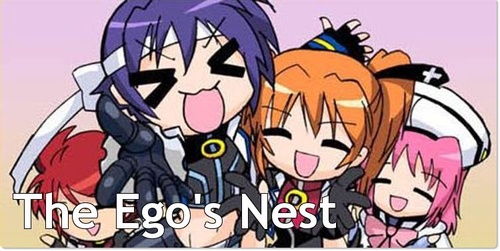 11 Could do with a drop shadow applied to the text, but seems fine otherwise!

12 Wonderduck - yep, can do.  I'll just do a little testing and should have the new tag working later today.

What I'll do is set the new default size to 480x270 (suitable for widescreen video and fits nicely in the default layout) and then add a size=XxY option to tweak it as you see fit, just like I have for images.

14 I'd prefer a slightly thicker outline, but there's no setting for that. ;p

I'll eventually swap out the image for something I don't have to blow up, but Lucky Subaru is just too damn cute.

15 The library I'm using at present doesn't support outline fonts, so I have to fake them, and that's fiddly enough that I didn't want to try to support variable outline widths as well.

Drop shadows are much easier because they just need an (x, y) offset.

16 Spam is a persistent pressure. Right now mu.nu is spammed up pretty good, and mee.nu is a bit. The minx.mu.nu returns 503. I went and started disabling comments on older entries.

17 Spammers need to be killed.

18 Oh, dear. I'm going to have to report you to the "New Civility" police.

20 Well, the other day I went through my comments, junked the most recent spam ones, then deleted a bunch as well. Today, about a year and a half of legitimate comments vanished. Well, they vanished from the comment list in the back end and the recent comments list, but they're still visible when viewing the posts. Any idea what's going on there?

21 That's a known bug. They'll come back when someone makes a new comment.

22 Pixy, we'll let you off the hook this time, if you kill the latest one.

23 Well, I had seen that behavior before, and I did notice that a small number of recent comments disappeared from the front page after my deletion spree.They were still visible in the comment moderation page. That was a couple days ago. I haven't touched anything since then, and this morning there were a lot more comments missing from the moderation page and the recent comments list.

Hmmm... I just posted a new comment, and it doesn't appear to have fixed the recent comments on the main page. *checks moderation*

Nope, no change there either.