Kurumi arrives tomorrow, bringing with her all kinds of sparkly goodness and 100TB of shiny bandwidth.

No, not that Kurumi, the good fuwa fuwa Kurumi. 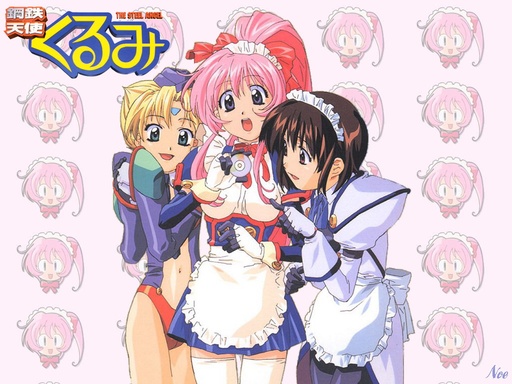 2 If we've run out of goddesses, we can do androids now?

3 My home machines are schoolgirl goddesses (originally it was more restrictive than that, but I ran out of names).  My portable widgets are miscellaneous moeblobs.

The servers are named for anime girls named for colours and starting with the letters A, K or M: Aoi, Midori, Akane (akane-iro = crimson), Mikan (mikan-iro = mandarin orange), Kurumi (walnut), Kitsune, Ai, Momoko, Kikyo.  The primary servers start with A, secondary with M, and special-purpose servers with K.

4 I only used this scheme once, when Ani-nouto was on a rented dedi at PacRack. The host was called "mitsuki" (after Mitsuki II of Dual), almost in line with other Animeblogger hosts "noe" (TT), "nodoka" (Saki), only with a retro tint. But my own systems date much further back, so they share a pool of LoTR plants, e.g. from elanor to lebethron.

6 ...but I like some of those AV starlets named Kurumi! I think they belong in your service room, I mean, "server room".

I have a proof of this using the latest results from the field of hyperfinite moemetamathematics, but unfortunately the margins of this blog are too small to contain it.

9 Totals may not equal 100% due to moemetarounding.

10 Does moemetarounding use Discrete Fractional Containers?

They're not round enough.

12 I don't know, the robot-maids in Steel Angel Kurumi might qualify as some sort of minor-league shinto kami.  They're activated by spiritual power & seem to fit within the objects-become-god class of shinto divinity.  Like trees or rocks, just more... animate.

13 Kurumi is plenty round enough. (Rather, if she were to get rounder, she'd have to diet...)

I actually enjoyed that show. Just don't read the manga... it was one of the few times where a story was significantly improved by throwing the manga continuity away.

15 I reserve the right to deliberately misinterpret such things for comedic purpose. ;p