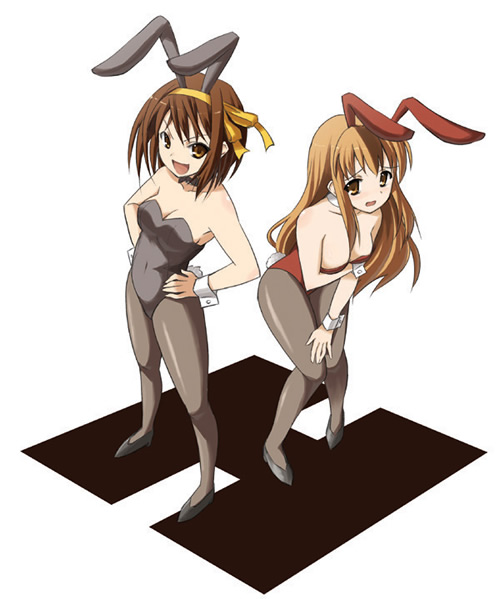 Though it's good, it doesn't strike me as being that outstanding. I suspect that what I'm missing is context. What I suspect I'm missing is that the hooplah was from people who were comparing it to all the other shows that came out at the same time, and by comparison to the normal run-of-the-dreck series from the last year, it really did seem like a lightning strike.

Context is key, in two ways.

First, as Steven says, 2006 was a pretty blah year for anime, and Haruhi is a good show, with a solid story, strong cast, and high production values.

BBCode update one for the morning: You can now add links to the attribution in [quote] tags. Just separate the author name and the link with a pipe character, |.  So in this case, the code was [quote="Steven|http://denbeste.nu"], producing

2 I'm not that big a fan of Zero no Tsukaima.

Shakugan no Shana, though, while we're on the subject of melon-pan.

3 I haven't seen either (I know, everybody can turn up their nose at me now).

However, I can attest that getting into an ongoing series or serial of any nature can at times be a completely different experience than shotgunning it after the fact.  I've seen or read things that had me by the edge of my seat at the time, yet just weren't as powerful when I went back to them after they had been completed.  There's just something about not knowing what's going to happen next, waiting days on end to find out.  Your brain entertains itself by imagining possibilities, wargaming scenarios.  That's a lot of fun by itself, and those who went through the experience will likely cherish that as much as, if not more than, the original content.

Nodame Cantible (though, really, it debuted in early January, 2007).

...and that's just off the top of my head, not even including Shana and Zero (neither of which did I watch).

I think the "2006 was a crappy year for anime" meme should be killed off immediately.  Haruhi was arguably the best of a very good group, as opposed to "the diamond in a bucket of filth" as some are beginning to say.

This list doesn't even include Otome wa... , Nana, Strawberry Panic, or Hellsing Ultimate, all of which were popular, though not what anybody would call classics.

Haven't seen it; it certainly has its fans.

Will give this one a try.

Watched the first episode; felt no great desire to watch the second.

I quite liked Aria the Animation, but haven't finished it, so I haven't watched Aria the Natural yet.

I'm not quite saying that.  I'm saying that Haruhi was a shining spot in a mostly blah year.