Big Toys And Little Ones

Kirino is home, though not yet unboxed; Menma awaits under my desk at the office.  I have 4x1TB drives for each (I bought those last year to upgrade Nagi, but still haven't got around to it), and I just need to find some more memory for them, since they only come with 1GB.

Meanwhile at my day job I have four 32-processor Opteron servers each with 256GB of RAM and 54TB of disk, with two more such servers and 60 SSDs on their way.  So right now I have a 128-processor cluster with 1TB of RAM, and that's going to grow by another 50% in the next month.  This will make my life a lot easier.

I'm just waiting for someone at work to object to my virtual server names - so far I've named them after characters from Winnie the Pooh, Ghostbusters, Life on Mars / Ashes to Ashes, and My Little Pony.  But by the time we're done we'll have something like 200 virtual servers, so we have to get names from somewhere.

Have you no decency, man?

2 Hmm, I can think of a lot of meetings that would have been improved by forcing developers and PMs to repeatedly say "Derpy Hooves",  "Scootaloo", and "Marmalade Jalapeno Popette".

(I found the wiki; it was terrifying)

J - and by terrifying, you mean awesome?  And... Also terrifying.

Ooh, Scootaloo, I don't have a Scootaloo yet!

4 If you have a soul... if you have any heart whatsoever... you'll put The Pond, and all of mu.nu, on Server Derpy Hooves.

5 We're having a few problems with that... 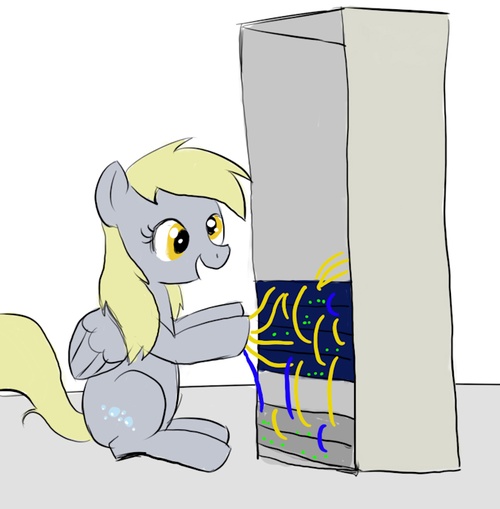 6 At work we have pot, ice, cocaine, etc. Not sure about a meth server though.