Dresden Codak is why I don't have a web comic.  Well, that and the lack of artistic talent.  Say what you will about Order of the Stick* or Erfworld* or Penny Arcade** or XKCD*, Dresden Codak is a work of art.

The story proper (that is, Kim's story) starts here.  The artwork in the older panels isn't as good as it is now, but it doesn't take long to start throwing up gems like Trouble in Memphis* or Girl vs. Bear.*  Or Dungeons and Discourse* or, of course, the delightful and aforementioned Copan.*  Or Rule 110,* which has one of the greatest lines in literary history.

* It's brilliant.
** Also brilliant, albeit erratic.

1 I see, that is pretty good indeed. A little convoluted and busy though, takes a lot to get used to.

I was looking for something like this ever since Questionable Content got stuck in the silly relationships rut.

It reminds me a bit of Argon Zark. Which gets updated about once a year these days, if not even less, but at least he hasn't totally abandoned it.

The first story got completed a long time ago and the second story is up to page 75 now. Over time he's changed the technology he uses a couple of times, variously including animated GIF's, JavaScript, and these days Flash. But it always looks really amazing.

Guess I Gotta Buy It

Sony have launched a new Y series notebook based on AMD's Bobcat processor.  The Bobcat is AMD's answer to Intel's Atom, but with superior processing power and dramatically superior graphics.

The new model looks very much like my Sae, which is last year's model: 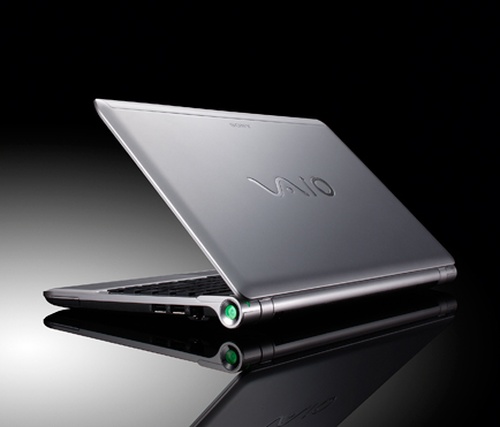 Though as you can see, last year's version came with a limited edition dramatic lighting kit.

The main difference is that the new models are about 20% smaller and lighter than last year's - they have an 11.6" screen instead of the previous 13.3" panel, though still with the same 1366x768 resolution.  Everything else has shrunk slightly to fit, including the price, about 30% lower than before.

Oh, and it doesn't come bundled with Adobe software any more.

So the new one looks just like Sae, but is smaller and has no artistic talent.

1 Now that's just mean. She passed the exams, didn't she?

4 I'm interested in getting this or a similar computer if it gets supported in Debian or Ubuntu sometime soon, but I haven't been able to find anything out in that regard.

Just though I'd note that if you have any of the the Sony Home Studio audiovisual apps (Acid Music Studio, Sound Forge Studio, Vegas Movie Studio), you can upgrade to the professional equivalent during February at half the usual price.

That brings the upgrade to Acid Pro down to about $100, which is an amazing bargain.  I already have Acid Pro because I was able to upgrade a copy I bought back around 2001, skipping three full releases.

The question is whether the average hobbyist needs the power of the full apps any more.  The Studio line is really powerful these days; with a few exceptions like Vegas Movie Studio's limit of 10 video tracks, they offer everything you're likely to need.  (How many people need Sound Forge 10's support for 64-bit audio?)

I personally find Acid Pro 7 somewhat overwhelming; even Acid Music Studio 8 has a lot more features than the copy of Acid Pro 3 I bought way back when.

But if you want it and have a few dollars to spend, now's a great time.  Even if you need to buy Acid Music Studio first and then upgrade it's still about 40% off.

P.S. Sony didn't pay me anything for this publicity.  Given the size of my Acid loop library, rather the reverse...

I'm watching Great British Railway Journeys, and the two things I've taken away from it so far are that Britain is (a) very, very green - in the literal sense - and (b) tiny.  The first episode covers a journey that is only a little longer than my commute for my day job.

Midway, the presenter stops in Rainhill, site of the famous 1829 Rainhill Trials.  What caused me to do a double-take, though, is that they illustrated this 182-year-old event with an 85-year-old reconstruction - a 1926 film called The Rainhill Trials.

Which movie I cannot find any mention of in Google here in 2011.  But give it a minute and it will be there.

Oh, a third take-away point: British engineers of the 19th and indeed 18th centuries were insane.  Need to move coal from your mines to Manchester?  No problem.  Build a canal.  Underground.