I love this headline from Slashdot:

It's like a newspaper headline taken from a 70's science fiction novel to show that we really are in the 21st century.  You get a few items that you understand, like:

California Expands DNA Identification PoliciesIndia Launches 10 Satellites At OnceFirst Superheavy Element Found In Nature
And then they drive the point home, with one that doesn't even give you a frame of reference.

Mind you, Usability Testing Hardy Heron With a Girlfriend is pretty obscure as well.

1 India definitely gets a prize for the goofiest space launcher. Even in the core-alone configuration used this time, it consists of a 4-stage sandwich: sold-hypergol-solid-hypergol. But this is not all. The GSLV consistes of the PSLV sandwich core and two hyperholic boosters made out of PSLV's second stage with bigger tanks. The solid core burns out before the strap-ons, so the vehicle flies for half a minute on the power of strap-ons before the whole contraption separates.

2 Whee.  As long as they don't try to launch manned craft with that thing...

3 Subjecting a friend, let alone a girlfriend, to useability testing an OS sounds like cruel and unusual torture.

Or at least grounds for splitting up.

In this case, he delivers a righteous serving to Ben Stein and the Intelligent Design movment as a whole.

And quotes yours truly in the process.  (And pops the bubble on the worst-kept secret in the blogosphere, but hey...)

I may disagree with him on quantum consciousness, but he's right on the money on this one.

Oh, and NRO have truly hideous URLs.  Worse even than Youtube.

1 i will have time for q-consciousness this weekend.
i am massing my armament right now.

The Triumph Of Technology Over Talent, Part XVIII

I was pretty impressed by this.  I showed it to my cousin - a SMPTE Fellow - and he was impressed.  That probably means it's impressive.

(I mistakenly filed this under Books, and got Ermintrude the cow as an icon.  Which was cool-looking, but not quite what I'd intended.)

1 So now a recording can be more perfect than it anyone can actually play.

Just like LotR digitally colored every frame to make New Zealand prettier than it is in real life (and it's the prettiest place on Earth).

In management we talk about managing customer expectations; the key to keeping people happy is keeping their expectations realistic. What are we going to do when Hollywood makes people's expectations for life unrealistic?

Kittens at this stage of development are known as "meepers", for reasons that shall shortly become evident.

1 My chihuahua is trying to find the kitties in my computer.

I tried that with my brothers cats but they didn't seem interested...

Why People Laugh At Creationists

Which reminds me - we need to add another letter to the Latin alphabet; either that, or standardize on duodecimal arithmetic.  At the moment, the upper and lower case letters plus the digits give us 62 symbols, which is not enough for handy base-64 encoding, which is what Youtube uses for their public IDs.  Which means a Youtube ID can begin with -, which is not exactly obvious when you're cutting and pasting.  (Not in this case, but in general.)

This article at Real Detroit Weekly includes some snippets from an interview with Expelled associate producer Mark Mathis (scroll down to the bottom to find the section titled Unevolved) who shows a depth of understanding of Evolutionary Theory rivalling Stein's.  True masochists can find an hour-long discussion betweent Mathis and the editors of Scientific America here.

1 Who made that video? The attack on the word supernatural ("it's a crutch"), while funny, came off a little bitter for general consumption, and not biting enough for the in-crowd.

I particularly loved it when Stein complained that the ToE didn't explain gravity. You know what? The ToE doesn't explain why my socks have holes in them. But the ToID (Theory of Intelligent Design... say the acronym out loud a few times, and imagine you're from Brooklyn) does. My socks have holes, gravity works, and people exist because God wanted it that way. There you go. Problem solved. Case closed. We can shut down the universities and put the professors to work doing something useful, like growing rice and reading Mao.

Oh, wait, somebody already did that... 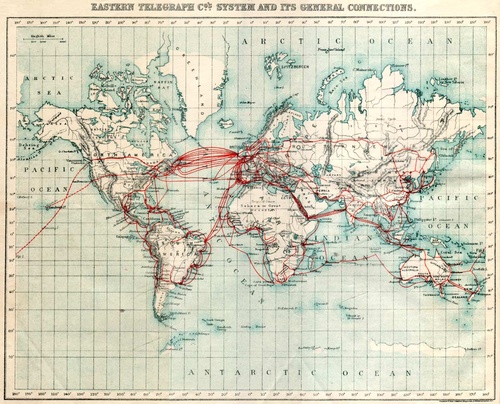 1 There was a book about it, called "Victorian Internet" or something like that.

2 I know this is obvious, but things sure have changed a lot since then.

It gives you a real sense of perspective to realise just how much the Victorians achieved with the technology of the time.

Not About Expelled. Really!

Okay, it's about Expelled.

There was considerable debate about the video's origins.  On the one hand, it refers to the film Expelled; there clearly was some connection.  On the other hand, it's witty and intelligent, and presents the case for science in a rather amusing way. As such, it appeared on quite a few science blogs.

So if it was produced by the Expelled people, it must be considered as something of an own goal for their cause, and yet a greater artistic and intellectual achievement than the main feature.  Some argued that because of all this, it couldn't have been produced by the humourless clods behind Expelled.

They were sort of right.

The producers of Expelled hired another studio to produce Beware the Believers:

(via The Panda's Thumb)

Update: Both the animator and the lyricist appear in this comments thread at Pharyngula to explain how the whole thing came about.  Pharyngula is the blog of biologist and cephalopod fancier PZ Meyers, who appears in both the film and this video.

This Would Make A Great Anime

Aboard the Lexx, Stanley Tweedle (captain of the Lexx, arch-traitor, and the only human among the regular cast) has taken ill and collapsed.  790 (a robot head) diagnoses him with elevated levels of hydrogen peroxide in his blood and a depressed immune response, but lacks the facilities or specialised knowledge to determine the cause.

Luckily, the Lexx is near the planet Ruuma, and the planetary governor promises them medical assistance.  This is actually a scheme to get the Lexx to rescue the governor and his family before they are eaten by the zombie bodies of the Divine Predecessors - Ruuma has long been used as the burial ground for former hosts of His Shadow because of the unusual effects the planet has on dead bodies.  (By coincidence, the brains of the Divine Predecessors happen to be aboard the Lexx...  Or at least they were; their numbers have taken something of a beating of late.)

So Xev (half love-slave, half cluster-lizard, all hot chick) and Kai (last of the Brunnen-G, an undead alien assassin) take the comatose Stanley down to the planet, where the medical robot 792 diagnoses him with a selenium deficiency due to eating nothing but the goop generated by the Lexx's galley, and prescribes the governor's anti-dandruff shampoo as a treatment.  (Which is not entirely absurd - some anti-dandruff shampoos do contain selenium, and selenium deficiency can cause serious health problems and even death.)

Meanwhile, Kai has started feeling the effects of the planet, being, after all, dead himself, and has taken to spouting very, very bad poetry.  The governor's family lock Xev out of the fortress to be eaten by zombies while they make off with the Lexx.  792 opens the door again to assist the zombies, but not before Xev is bitten.  The zombies eat the Moth, the flying machine that is the only way the crew can return to the ship.  Everyone rushes upstairs to the communicator to contact the Lexx, with the zombies close behind.

Back aboard the Lexx, Lyekka (an alien space plant spore and hot chick) has woken up hungry.  Nothing edible is left aboard, so she heads down to the planet and there devours the governor's daughter and wife, while Xev, rapidly degenerating into zombiehood, eats the governor's brain.

Stanley makes it to the roof of the fortress, to find Lyekka and Kai and a Moth waiting.  Zombie-Xev tries to attack them, but they subdue her and return to the ship, where they effect a rather icky cure.

Then, before Stanley can order the Lexx to destroy Ruuma as a hideous waste of silicon, the entire planet is eaten by Mantrid drones.

1 Man, it's no wonder that was cancelled.

2 By the end of the second season our heroes have inadvertantly brought about the destruction of the entire universe.

And the show ran for two seasons after that.

Finally started watching this, after having it on the shelf since about 2002.

Let me get this out of the way: this is classic bad sci-fi, cheesy as hell.  But it's fun, and the actress who plays the original Zev (I'm still watching season one) is stunning.  Shame they had to replace her in season two.

Apart from Zev, you have to admire the Lexx, a miles-long intelligent (but not exactly bright) organic spaceship that demolishes entire planets and uses the debris as a delousing spray.

1 The original mini-series was gloriously cheesy sci-fi with some glorious cheesecake in the person of Eva Habermann. Xenia Seeberg grows on you after a while, but she just doesn't stack up to the original.

Sadly, when they expanded it to a real series, the writing went from cheesy-bad to just plain bad. And Nigel Bennett sleepwalked through the way-too-many episodes he was in.

2 Yeah, I'm into season two now, and while it hasn't devolved completely as yet, it's not the same.  And Xev is attractive enough, but she's no Zev.

One point in its favour is that it has some sense of scale.  When the heretics' rebellion was put down by His Shadow, 685 billion people died.  Compare that to the absurdity of Stargate Atlantis, where the entire Pegasus Galaxy appears to have a population numbering in the tens of thousands...

1 Can I ask for your e-mail address? I would like to ask something from you. While I know this is not the proper forum, I realized that since it's the most recent post of yours (and your about page is unavailable, at least to me) I believe it was a rational choice.

2 No problem, I've emailed you.