That was really good.
This show shouldn't work as well as it does.  It's a stupid little one-joke gag manga.    I'll have to see if I can find the manga itself (yep), because the anime does something rather clever with that: The joke isn't the joke, and they never actually tell the real joke, they just let you catch glimpses of it.  And it never stops being funny.
The camera angles.
And all the while, they're busy trotting out tired old cliche comedy characters and turning them into real people so deftly you hardly notice at first.
I gave the first episode a 3 out of 5, when I expected it to be a 2 at best.  By episode 5 it was a solid 4. This latest episode was a 4.5.
Recommended.
Update: I just read the two of the chapters that made up episode 8.  All the material is there in the manga, but I like the anime a lot better.  And there's enough material in the manga for a second season (they're currently on chapter 41 out of 119), so I'm hoping it does well enough for that to happen.

With episode 7, Ushio and Tora has diverged from the 90s OVA and is covering new ground from the manga.
I was wrong that it was keeping the pace of the original, too.  I just checked if this episode was something I'd forgotten from the original, and found that the sea monster from last episode took two episodes in the OVA.  I was worried that with 39 episodes instead of 10 they might draw it out and spoil the pacing, but they have 33 volumes of manga to get through and it looks like they're not going to slow down for anything.
What they really must do, though, when they come to the end, is remake the songs from the original CD Theater bonus.
Unfortunately that's a VHS transfer (I have that tape) and it skips, but there's a DVD version available if you know where to look.

I was looking for a Potemayo video, honest.*
* They've been eradicated.  Don't know why.

1 I searched at YouTube for "Guchuko" and found a lot of stuff. Weirdly, they were subtitled but had been swapped left-for-right. (Maybe that's why they never got noticed?)

Ushio and Tora has been in my all time favourite anime list for so long that I was starting to forget why it was there.
The reason is this: It's really, really good.
The new TV series is still running parallel to the 1990s OVAs, essentially episode-for-episode, with just some minor tweaks - for example, Ushio's father actually shows up now and then, and in this latest episode Asako has a cell phone with her when she's swallowed by a giant sea serpent.*
More importantly, six episodes in, and they haven't set a foot wrong.  Okay, maybe the CGI doesn't always mesh perfectly with the cel animation, but they've been completely true to the story and the feel of the original series.
Five fluffy monster kitties out of five.
* And when I say "giant", this thing has entire cargo ships floating in its stomach. 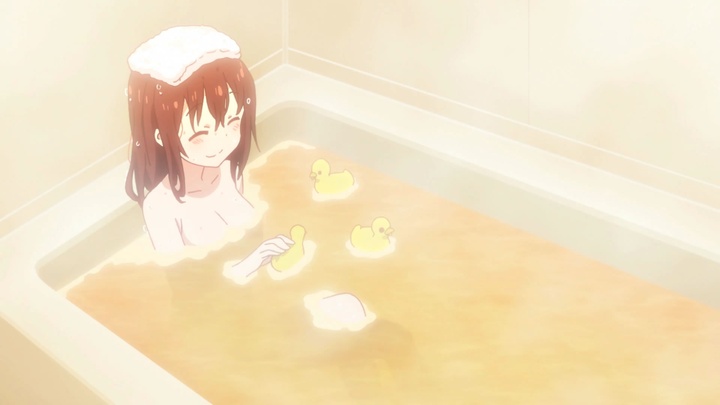 Four hamster cape thingies out of five.*
* I wondered how Umaru's hamster outfit didn't git a bit ratty when it's all she ever wears around the house.  This episode answers that question.

Did that sheep just say what I think -
Yes, yes it did.
Usual excellent production qualities from this recent Kyoto Animation outing, with the usual meh story.  I thought it was another original story like the very meh Tamako Market. but no, there's a series of light novels.
3 pervert sheeps out of 5.

1 It wasn't horrible but it wasn't great, either. Very much "meeeh". (But not quite "baaaah".)

3 Nothing obvious.  I haven't had any problems, and the server load is fine.

I bounced the Minx service just to be safe.  Let me know if you still have problems and I'll take a closer look.

I'm disappointed that himouto isn't a portmanteau of hamster and imouto.
The first episode is a bit shaky, but episodes two and three were stronger, making the characters seem more like people and less like comic props.