I only get to watch anime at two times: When everything is going smoothly at work and all is well with the world and I have peace and quiet in the evening, and when everything is a multilayered blancmange of disasters and I'm up all night rebuilding servers and need something to keep me company.

That said, where are we at with the Spring season?  I rated it a big fat meh when the previews came out, but I've changed my tune since then.

Whenever I want to talk about the show I have to go find a previous post and cut and paste the name.  Other than that, it's awesome.  I haven't talked about it much because I want people to experience that for themselves.

It's a straight-up moe show, cute girls being cute, with no particular gimmick.  And it pulls it off very nicely; the girls are individually and as a group, utterly charming.

It's a 2-cour (24-26 episode) series, so it's taking longer to get going and hasn't grabbed my attention fully as yet, but it shows great promise.

The World God Only Knows II

Okay, it's a continuation of the previous season - though not a sequel, because the first season only covered the early chapters of the manga.  And, like the first season, it's fun and has some great comedic moments.

C - The Miscibility and Solubility of Colloidal Precipitates

While this show is generally well done, it's the sort of thing where the quality of the show as a whole depends utterly on the denouement.  This show will only be as good as its ending, and I predict that the ending will be absolutely terrible.  (Based on the fact that the story so far makes not the slightest shred of sense.)

It's cliche-blend-o-matic time, and nothing is new under the Sun.  But it's at least nice to look at.

Much much better than its original premise would suggest, but it would pretty much have to be.  It's actually the story of two young girls growing up away from their mothers -

Uh-oh.  I thought I heard something moving around the other day.  There it goes, into the pantry.  Let's see, if I board up the entry to the kitchen, and chase it out of the pantry into this cleverly-placed box, it will - yes, it will escape into the laundry.  Guess someone's going to be buying some mousetraps tomorrow.

1 Yes you are. Any show about bodily secretions automatically sucks for that reason alone.

2 They pretty much discard that premise.  They actually turned it into a show about family values.

They didn't do as effective a reversal as Popotan, but it's nothing like what you'd expect given the original concept.

3 I only looked at it because the review on ANN was far more positive than I'd expected:

In 2010 I gave Surprise of the Year honors to Asobi ni Iku yo! for its unusually and unexpectedly high level of cleverness and general quality. Astarotte's Toy is not on that same level â€“ especially not on visuals â€“ but still more thoroughly defies initial expectations on the positive side than any other new title so far this year (except possibly Puella Magi Madoka Magica).

Turns out they're right.  On the other hand, initial expectations for this show were way negative.

4 I knew about it because of WAH's comic, funnily enough.

The World God Only Knows II

Yes, it's more of the same, but just like the first helping, it has its moments.

This scene cracked me up:

1 Awww! That Poley Bear is so cute! (He's thinkiing, "Hey, looks like dinnertime!")

2 Pixy, bug report for the new editor.  Earlier tonight I clicked on the "picture poster" button, and as it was loading I lost my internet connection (darn tornadoes, always causes my broadband to go away!).  It gave me the usual message ("your internet connection sucks!  Hit reload to fail again!"), and I indeed told it to reload...

...at which point, the entire post editing screen reloaded.  Taking with it an hour worth of work.

Just thinkin' that trying to reload the picture poster (I couldn't close it; it didn't get that far) probably shouldn't refresh the entire page...

Thanks for your efforts, Pixy!

Yes, I don't really like the new popups.  I'll see what I can do.

...at which point, the entire post editing screen reloaded.

Same thing happend to me with the extended character popup.  (My ISP's DNS tends to lose track of *.nu addresses; occasionally I'll get the "site can't be found" message when I'm in the middle of editing and have to retry.)  Appears the code for the popups doesn't load until they get requested (old editor did the same thing, but they were real windows...).

5 I may just have a solution for that - without having to change the editor itself.  Let me do a little tinkering.

6 I always go directly for less-more button and edit HTML. Much, much easier than tinkering with the editor. I publish all my posts in the same manner too.

7 There's a preferences page where you can choose your editor for posts (though it's kind of complex).

I'll set it so that you can choose your editor for comments as well.

Some of the background art ain't bad either.  (Boom-tish.)

Four points for the landscapes, minus three for being boring and stupid, plus one point for the railcar at the beginning, minus half a point for that disaster of a closing theme.

For a rainy Sunday only.  And (checks outside) light cloud only at the moment, so what the heck am I doing?

Update: Based on episode two, plus another half a point for ongoing gorgeous scenery.

This show may be dumb as a rock, but it's sure nice to look at.

I couldn't do a full-length figure because she's moving during the camera pan, but this part works well enough.

1 How are the girls?

3 Those really are gorgeous backgrounds.  (And sometimes I de-pan pans.)

Hidan no Aria has a monorail, but it's not the same.

3 I saw one of those from a Shinkansen window at a stop halfway between Sendai and Akita.

C - The Monsoon Of Controversial Possums

There's a line between well-constructed mystery and stupid crap, and I'm not at all convinced that C is on the right side of it.

Also, whoever directed the currency animation sequence in the opening credits: Read a history book, asshole.

One and a half delicious banknotes out of four, subject to later revision upwards...  Or downwards.

1 Seems like the show could be ended just by handing a copy of Faust to the protagonist.

2 He actually refused the deal originally, and had to be tricked into it.  Score one for genre awareness.

Though it does have a monorail (That Imouto Show, Midori no Hibi) so it's not all bad.

With Ao no Exorcist, I get the feeling that the director is talented, but not as a director.  As an episode director or animation director, with someone else overseeing the project, he's probably quite good.

With Hidan no Aria, I get the impression that the director's talents lie with directing.... But he's either no good at it or has stopped caring.  Since it's (google google...) Takashi Watanabe, who previously directed all of Slayers and Shakugan no Shana and a bunch of other stuff (Lost Universe, Ikki Tousen, Stellar Buster Mito), he's clearly capable of much better work.

One twintailed tsundere out of four.

Pixy, I just tried uploading an image into that new "top" directory and got an error-500 "No such directory".

Also, there's a problem with the new editor. When I do a "paste", the pasted text always goes at the beginning of the window, not to where the cursor is located.

3 Monorail in Midori no Hibi was crap, the German hanging design. Alweg forewa!

4 Slayers and LU had some pretty inconsistent directing and pacing too. Maybe it IS just that he's not good at it.

5 The problem is the source material.  This is actually better pacing than in the manga.

6 Huh.  Yeah, if the director was given a turd and told to polish it, I can see it turning out this way.

7 I just read your rant.  I've been approaching this show all wrong.  Clearly the correct way to watch it is to get completely plastered first, preferably with friends.

Wow, this is a train wreck.  It has plenty of good elements - well-defined characters, strong action and dramatic scenes - but as a whole it teeters on the brink of complete incoherence.

Directed by Tensai Okamura (Darker than Black, which did not impress either) from a manga (apparently a debut work) by Kazue Kato.  I'd like to check out the manga to see where things went wrong.

When and how did the weakest anime season in recent years turn into one of the best?

Whatever; please keeping doing this!

The girls in A Channel are riding the Enoshima Electric Railway: 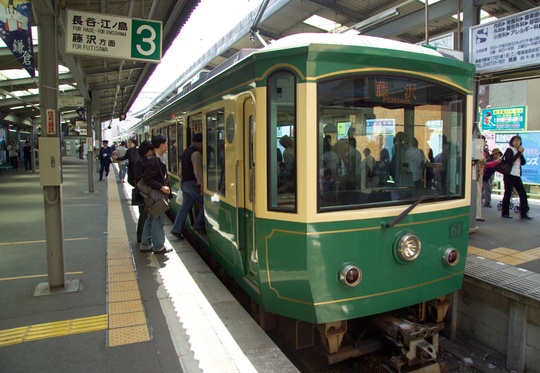 This may be the spot where Run starts chanting Umi!  Umi! 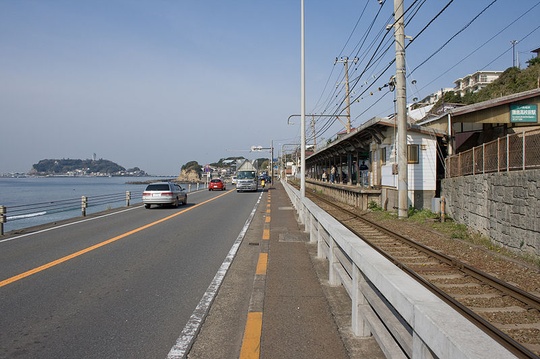 And this (Koshigoe Station in Kamakura) could be where they find themselves in the middle of the road: 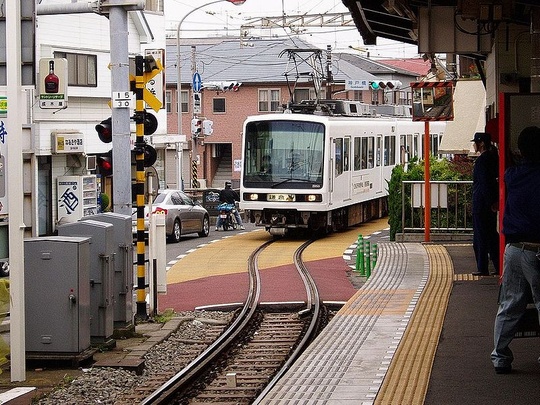 The first one is an obvious perfect match that I just stumbled upon based on this post on AnimeSuki; the latter two are guesswork from what I can find on the net.  All three pictures care of Wikimedia Commons.

Update: Um, a few posts further down someone did my detective work for me.  Oh well.

Update 2: Ah, now I realise they're starting from the Kamakura end of the line, so I don't know if that sequence of photos makes sense.  But it's definitely the same train at the same station.