It's been a while since I bought myself a new toy.0  My current pair of laptops from last year (Mio and Sae) are doing fine and don't need replacing.  My current Windows desktop (which dates back to 2008) needs to be rebuilt, but I already have the parts for that and just haven't found the time to do the necessary work.  My Linux box is pretty much okay, though it's full of backup files because I have nowhere else to put them.  More memory would be nice when I'm playing around with large databases or working with lots of virtual machines at once, but to get there I'd have to replace the motherboard as well, because while the current board supports 16GB of DDR2, up from the 8GB actually installed, it would be cheaper to swap the board for a DDR3 model than to track down the rare and expensive unbuffered 4GB DDR2 DIMMs I need.

Which ain't no fun.

A new video card is always nice, but my 4850 is doing pretty well, and I've finished Mass Effect 2 and Dragon Age: Origins, so there's nothing taxing I really need to play until Mass Effect 3 comes out next year.  And with AMD's 7000 series based on a 28nm process expected around the end of the year, now is not the time to buy.

What I really need is products that are reasonably priced and simply do what it says on the box.  Buy them, plug them in, leave them to work.

I've had my eye on some cheap Buffalo Linkstation Pro Quads -  a cute little 4-bay NAS, about 6x6x9 inches, which goes for less than $250 locally without disks.  I can pick up 2TB Seagate or Western Digital drives1 for less than $90 each, so it's about $600 for a 6TB RAID-5 NAS.  Pretty good; my LaCie 8TB RAID-5 unit ran something like $2000 back when.  But I'd need more than one of the Buffaloes, and that's kind of a bore, even if they're small and cute and I can name them after the fairies from Sugar.2

I regretted not getting more of the old Acer Easystores when those were going cheap (the discontinued Linux model, not the later Windows Home Server model), so I've been thinking of maybe getting three or even four of the Buffaloes.

Then I saw this: 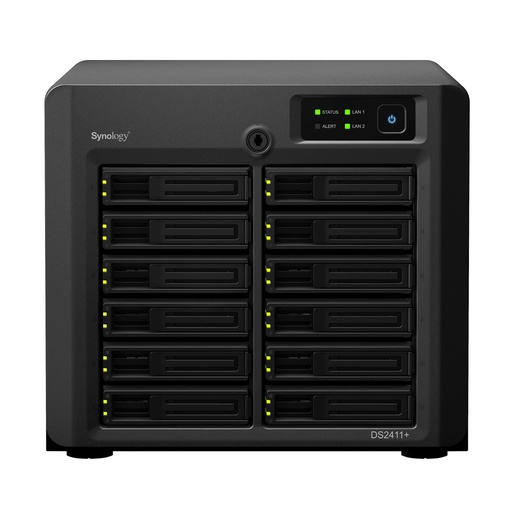 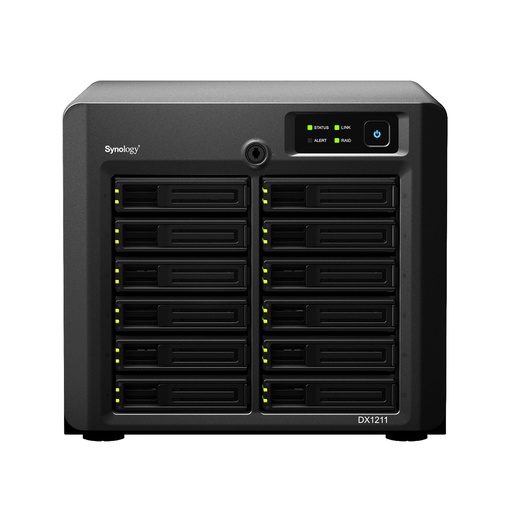 The DX1211 expansion unit.  No, it's totally not the same image  twice with the product name Photoshopped over.

Well, in fact it's not cheap, but it's not nearly as expensive as I'd expected.  $1550 for a 12-bay high-performance (for the market segment) SMB6 NAS is a steal.  It's not rack mount, but I don't have a rack.  The expansion cabinet isn't much cheaper than the main unit itself, making that a dubious proposition, but it's there if you need it.

As well as the basic SMB,7 NFS, and FTP, it's an iSCSI target (that is, it can serve as raw disk as well as shared filesystems), a web server with MySQL and PHP, a recording station for TCP/IP-based video cameras, a streaming audio server, an automated BitTorrent/eMule/Usenet downloader, an iTunes server, a print server (it has four USB ports for attaching widgets), a mail server, a firewall, and a VPN server.

Or to put it another way, it runs Linux.  But it has a pretty front-end.

It does all the usual things you'd expect storage-wise: RAID-0, 1, 5, 6, and 10, online capacity expansion and RAID level migration, and it has a hybrid RAID mode (like the Drobo) that lets you mix and match drive sizes and automatically balances them with single or double failure protection and gives you the optimum disk space.

It's a fair bit bigger than the Buffaloes - about a twelve-inch cube, so about four times the size and six times the price for the empty box.  But I can pop a dozen cheap 2TB drives in there, RAID-6 them, and then forget about it.  That's precisely what I need.

There's an even more powerful model, the DX3611xs, with four network ports, two InfiniBand ports for expansion, and two expansion slots besides, but that costs more than twice as much and still only has 12 bays, so it's not what I need.  Might be just the ticket for the office, though.  And this is where the expansion units make sense - with a much more capable but concomittently exorbitant main unit, you'd want the ability to add as much storage as possible, and the DX1211 expansion runs a little over a third the price of the DS3611xs.

Update: With the latest version of the management software (currently in beta) it's also an ISO server (serving CD/DVD/Blu-Ray images as network drives), a syslog server (for collecting logging data from multiple Linux or Unix systems), an Apple TimeMachine backup server, a scan and fax server, an LDAP server, and a Youtube video snaffler, among other new features.  It's really quite shiny.

0 The Steam and GOG sales don't count.
1 I already have a small herd of external 2TB Western Digital drives here that I've been using for backups for my dying Windows box.  Wonder if they come out of their casings easily?
2 The LaCie is in fact named Sugar.  It's white3, and it's a cube, so that was obvious. 3 Well, it looked white in the photos.  It's not white.  It's an unpainted cast aluminium block.  I named it Sugar anyway.
4 Link aggregation.
5 Woo! 6 Small-Medium Business. 7 Server Message Block, a.k.a. CIFS.