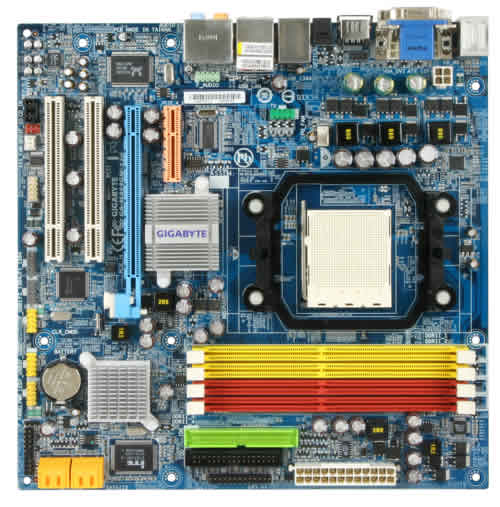 It supports up to 16GB of memory (ECC optional), four SATA 3Gb/s drives (with RAID 0, 1 and 10), 2 IDE drives, gigabit ethernet, ten USB 2.0 ports and three Firewire ports; 7.1+2 sound and optical and coax S/PDIF in and out (with optional bracket); VGA, DVI-D, HDMI, component, S-Video, and composite video outputs (though you can only run one digital and one analog output simultaneously); PCIe x16 and x4 slots and two PCI slots.  And serial, parallel, floppy, keyboard and mouse, though you need to get optional brackets for the serial and parallel ports.

Apparently it performs well and has good overclocking features too.

Well, the 690G northbridge provides 24 PCIe lanes, but four of those are used to connect the southbridge, so only 20 are left.  The southbridge doesn't integrate either ethernet or Firewire, so if you want a x16 slot and a x4 slot, those have to go on PCI.  And clearly you can't have any more PCIe slots either.  (The S2H's big brother, the GA-MA69G-S3H, has three PCIe x1 slots in addition to the x16 and x4.  Since this is impossible, I'm not sure exactly how they did it.)

Onboard video might be up to playing something like Sims 2, but nothing beyond that.  It's about equal to my old 9600XT (4 pixel shaders, 4 ROPs), except that AMD have pulled out the vertex pipelines and left that to the CPU.

Apart from those minor issues, it's an amazing little board.  I want one two.