Relevant Observation of the Day 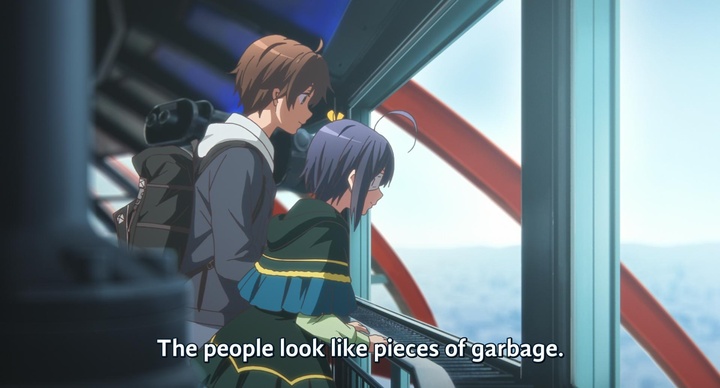 Just finished Chunibyo.  Well, both TV series, both OVAs, a couple of the little specials, and the second movie.  The second TV series is a little wobbly precisely because the first series ended strongly, but the second movie puts everything back together.

The first movie is a retelling of the first TV series, so I've skipped that one for now.  Watch it in that order: TV 1, OVA 1, TV 2, OVA 2, movie 2.  All the little specials aside from the two full-length OVAs are optional.

As a whole I give it three idiots out of four.  A bit uneven, but recommended.

I'm starting to run low on things to watch, having recently burned through:
Dirty Pair TV & OVA
Endro!
My Roommate is a Cat
Hinamatsuri
Iroduku
Bunny Girl Senpai
Sakura Quest
Golden Time
Chunibyo
Currently moving on to Danmachi and Non Non Biyori, which will hit the bottom of my unwatched pile.  Then I'll need to move on to the partly watched stuff, both old (Zettai Karen Children) and new (Made in Abyss).

Recommendations welcome.
Disclaimer: Do not chain your sushi.

1 "If this roadmap is real and AMD does launch a 16 core mainstream CPU this year, it will be three years before Intel has a counter to it."
If it's real, I would kind of expect it to get revised really fast if Ryzen 3000 has more than 8 cores.  This seems a lot like how Ryzen caught them flat-footed, but they managed to ramp up 6- and 8-core desktop processors pretty fast.  (There has been speculation that they managed to come out with them so fast because they'd been designed already but Intel didn't bother to release them as long as there was no real competition.  I have no way to even guess if that could be true.)
Intel using chiplets so soon after deriding Epyc/Threadripper as "glued-together parts" is pretty funny, too.

2 Ryzen 3000 will definitely be available with more than 8 cores - Lisa Su said it herself at CES during the press Q&A session, but wouldn't be drawn on how many more cores.  So it might be 12 cores for thermal reasons, with 16 cores coming later.

3 As much as I understand, Azure emerged as the only alternative to Amazon. Google just can't do it and is fading. Not that I use any cloud services beyond cheap VMs at OVH myself, but that's what I heard.

BTW, check out what one of my friends is up to, a couple of days ago:

5 Microsoft has been very aggressive in getting Azure into businesses lately as well.  Rumor mill in my company has been that they got us to agree to a full Microsoft stack going forward by also giving discounts for Win 10, Office 365, and even some of their data lake technologies .  This was when IT was trying to figure out how to move from Win7/Office 2010 and deal with an antiquated reporting charlie foxtrot, so it became very attractive vs AWS. 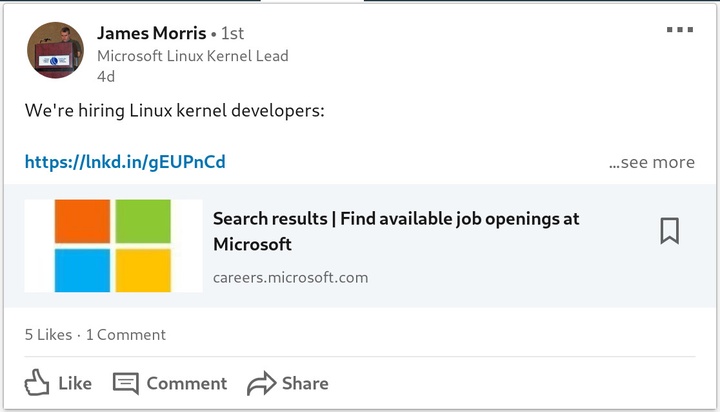 I hope Microsoft keeps working on WSL.  It's getting to the point where it's almost good enough and I don't need to run VirtualBox any more.

7 I didn't do a ton of extensive testing but everything I tried under WSL worked--even running X applications with ximg.  (Don't anyone tell jwz that you can now run xscreensaver on Windows!)

8 What did you think about the shows you watched?

9 Endro! - Light and fluffy, no surprises but worth a try if you're looking for that, and has some great comedic moments.
My Roommate is a Cat, Hinamatsuri, Iroduku, Bunny Girl Senpai, Sakura Quest, and Chunibyo - All surprisingly good and recommended.  (You need to watch at least two episodes of Chunibyo before you get any notion of what it's about.)

10 Not listed are at least half a dozen shows I bounced off after less than two episodes.

Sakurada Reset might have an interesting story but it had zero budget, possibly the direct opposite of Golden Time.

The others I've already forgotten.  There was one with a girl who eats books.  Not good.

11 It's not cooked yet and I don't want it escaping so the chains are not going away.

13 Sorry, don't know what happened to the carriage returns.

14 Not you, it's a problem with this editor in some recent browsers. Like, oh, the current version of Chrome, which just did the same thing to me.

I've licensed a new editor but haven't had time to install it yet.

* Puella Magi Madoka Magica - haven't actually watched it, probably about time I did
* Gakkou Gurashi! (School-Live!) - tried it, not for me due to (spoilers)
* Yuki Yuuna wa Yuusha (Yuki Yuuna is a Hero) - will try, kept seeing it on Netflix but didn't get around to it
* To the New World - never heard of that one, will look it up
* Flip Flappers - not for me
* Kiniro Mosaic - have seen a couple of episodes, liked it but it didn't grab me right away
* Hibike! Euphonium - been meaning to watch this one
* Flying Witch - love this one
* Little Witch Academia - BEST ANIME EVER
* Boku no Hero Academia - loved season one, felt let down by season two by comparison
* A Place Further Than the Universe - loved it
* Mob Psycho 100 - haven't seen it, will give it a try
* Time Travel Girl - like it a lot so far (about eight episodes in), should get around to finishing it

15 In FF, it seems like it eats single line feeds, so putting an extra one seems to work:  use two to get one, three to get a paragraph break with a blank line.