Take That You Talking Tuna 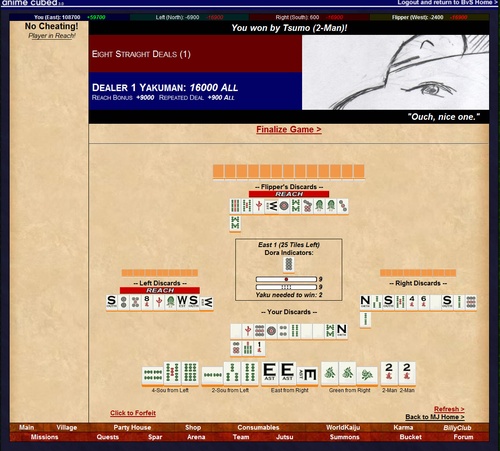 Are you joking? Or is that really a yakuman?

(Because all four melds were from other player discards? Is that the reason?)

3 No, ANY hand is a yakuman if you've won, as East, eight times straight.

4 That seems like piling insult on injury. If you've won 8 straight, you hardly need the extra points.

5 That's kind of the point, really. If you've won eight straight, and you haven't driven someone negative by then, the yakuman will almost always finish 'em off.

7 Yes, but it seems a bit pointless so far.

He Was A Visionary, You Know

Those who would give up Essential Liberty to purchase a little Internet Bandwidth, deserve a Kick in the Crotch.

German is without question the best language for describing technical faults:

Knowing that the Archiv is momentan nicht verfügbar makes it seem better, somehow.

1 Is "verfügbar" the German for "fubar"?

2 In a perfect world it would be, but it's actually "available".

About six months ago, I was looking for a database that didn't suck.

At the time, there weren't any, though some showed promise.  Redis, for example, had a great feature set but was limited to in-memory databases.

This has now been fixed.

Fortunately (or... otherwise) my day job ate all my time for six months, and now that I'm finally returning to this project, Redis is ready for me.

While it's not the solution for every problem (the main data engine is single-threaded and blocking, so your overall throughput is limited by CPU speed) it now supports virtual memory and multi-threaded I/O, so it can scale to significantly larger datasets.

The big advantage of Redis is that it provides lightweight implementations of a variety of different data storage methods - not just key/value stores, but lists, hashes, sets, ordered sets, and message queues.  You can also set expiry times on entries to use it as a cache.  So with a bit of lateral thinking one server can replace a regular database like MySQL, a messaging system like ActiveMQ, a caching system like Memcached, and a document store like CouchDB.

It doesn't support strict transactions, but it has transactional features that are good enough for most tasks.  It also has a nice simple replication model.

You're not going to build the next Facebook on Redis - it simply won't scale - but if you're working on something a bit smaller (like a multi-user blogging app) it might be just what you need.

Not that I'm thinking of rewriting Minx - but the new module I'm developing is going to use Redis for most of its data, and if that experiment works well, I'll naturally look at extending it further.

So, as is my wont (and as is the wont of any programmer who wishes to retain what's left of his or her sanity) I ran a benchmark on Redis before going any further.  My own benchmark.  Redis comes with a benchmark that cheerfully reports ~100,000 reads or writes per second.  I do not trust it.

For the string benchmark, I am creating records each containing ~1kb of static text.  For the JSON benchmark, a Python dict is converted to ~1kb of JSON text.  For the hash benchmark, the same dict is stored as a Redis hash - basically, an extensible record structure.

String performance is not to bad for a single-threaded client/server code with no optimisations - approaching 20k ops/s for both reads and writes with a meaningful payload.  Good.

The JSON benchmark is reading and writing exactly the same amount of data, showing the overhead of the JSON (actually, SimpleJSON) library.  We still get over on the order of 10k ops/s.  With MySQL on the production server, that's what I see on cached queries.  So far, so good.

If you pass the Python Redis library something that's not a string, it turns it into a string.  No magic.

Update: Tweaked and re-run, with some interesting results:

1 Here is a benchmark that you can probably code pretty easily in Python / Java against any key-value database: http://docs.google.com/View?id=dd5f3337_24gcvprmcw

I have the code for an implementation in GT.M that you can use as a template (if any construct is not clear, please ask): http://docs.google.com/View?id=dd5f3337_25fv4vnnfw

Been one of those weeks.

Anyway, on the previous subject, this puppy would likely be a little more budgetarily feasible:

Very similar overall; this CPU is a quad-core 2.4GHz, but with a somewhat better architecture and hyper-threading, so performance would be close to the AMD chip.  This motherboard comes with quad GbE, so I can have lots of fun inventing weird network topologies.

Either one would run Minx with no problems at all; they wouldn't run the CPanel accounts, though; Apache and PHP chew up memory and CPU like nobody's business.  There's not much expansion space, though, except for RAM - up to 32GB of affordable modules, and on the AMD board, up to 64GB of really expensive ones.

But what you get for that is a 64-processor server with 128GB of RAM and 12TB of disk with a 96GB non-volatile cache.

Which fits in 2U of rack space.

There's also a version of the motherboard with built-in QDR Infiniband, but it costs twice as much.

Or this, for storage:

I don't need 72TB of disk space, but I know someone who does.

2 In fact, that's exactly what I had in mind.  At least, partly.

I was looking at using MongoDB for Minx; unfortunately, it doesn't like OpenVZ at all; if your database is bigger than the memory available to the virtual machine, MongoDB will crash.  (It's a known bug and they're working on it, but it would require a whole new storage engine to fix.)

This system is actually four 16-core 32GB servers packed into a 2U chassis.  So one for the applications, one for MongoDB, and two for Counterstrike.

3 Of all the NoSQL databases I've looked a recently, the three that are most interesting are MongoDB - which crashes under OpenVZ; Redis - which requires all data to be in memory at all times; and Keyspace - which is a simple, reliable, key-value store that actually lets you inspect the keys (which almost nothing else does).

Naturally, the developers of Keyspace are dropping it to move on to a new project.

4 Thanks for not looking at Couch at least. Man that thing was ugh. Mongo I actually considered. The problem is, however, it's not a better db4 than db4 (that would be Tokyo and now Kyoto cabinets). If you use Mongo as a drop-in nosql, you win exactly nothing. To get the advantage, you have to steal from J.Greely's playbook (of course I had his blog posts squirreled away for a better time). You have to make your application to use Mongo, and that loses you portability. You are a slave to Mongo from that point on.

5 Yeah, even after testing at full scale, I had to basically start over from scratch when I ran into some of the more interesting limitations in 1.4.x. Once the 1.6 branch stabilizes a bit, I may be able to get closer to what I originally wanted.

6 Mongodb has some interesting tricks that solve some specific denormalisation problems I have with Minx.

I did look at Couchdb, but it doesn't really give me anything I need.

The simplest solution I can see that gives me everything I need would be Mongodb + Redis + Xapian + Memcached.  Which is kind of a mess and would require a non-OpenVZ server for MongoDB, but should at least work.

It's an indication of just how fast and far computer science has grown that there are now such a wide variety of sub-specialties which are so different from one another that experts in them cannot converse intelligently.

When I was still able to work, my area of expertise was embedded software. I know nothing about databases. It's all greek to me.

8 I should have said "Jeff Darcy considered Mongo seriously" because of course I am not competent to consider it seriously.

Not that there's anything wrong with that.

1 The first episode was not bad. I saw the anime series as well, I liked it so much I loaned to a friend of mine who is into bacteria and such (but not sake brewing).

Asked on Triple J’s Hack program this afternoon if the Coalition would vote for the [internet filter] policy if Labor won the election, Hockey’s response was short and to the point.

Finally.  Someone I can vote for.

Screw you, Team Ranga.  Shoulda dumped Conroy when you had the chance.  And Team Watermelon - green on the outside, red on the inside - while consistently against the Great Firewall, are equally consistently the party of economic suicide.

Finally. Someone I can vote for.

No, You Can't Have A Pony

We seek the following from the BDFL:

We do have as fresh supply of adorable miniature giraffes, though.

3 We do have as fresh supply of adorable miniature giraffes, though.

Chávez, in other words, is very close to the climactic moment when he will announce that he is a poached egg and that he requires a very large piece of buttered toast so that he can lie down and take a soothing nap.