TI Blaze.  Screw the iPad.  This is the future.

On the one hand, it's a huge clunky thing. 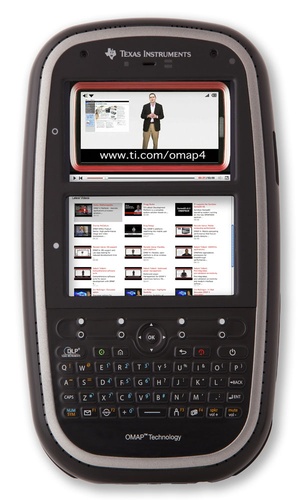 On the other hand, it's a development platform, not a consumer device; it has two 800x480 touchscreens, HDMI out, and a built-in DLP projector; it has two five-megapixel cameras at front and a twelve-megapixel camera at rear; a dual-core 1.2GHz Arm Cortex A9 (superscalar out-of-order SMP); accelerometer, compass, ambient light, proximity, barometric and temperature sensors; Wifi, Bluetooth, and GPS; and easy and open access to all the electronics, networking, and software.

Tech's slate (from the Accountancy story further down) isn't that much more advanced than this beastie.

1 Why would you need two cameras on the front?

2 Same reason we have two eyes.

EA have just earned themselves brownie points with millions of gamers by re-releasing three of the older Command and Conquer games - Red Alert, Tiberian Dawn, and Tiberian Sun - free.

I have a working base storage class for Pita.  Unfortunately, most of my weekend was eaten up by my day job and other miscellanea, but it does work.

I'll post the full code later in the week once I have a derived class or two that does something more useful, in the meantime, here's the test code to give you an example of how it's used:

The base view class, which has no indexes, no persistence, and no support for sorting, is called an Oodle.

The results of the test?

Update: We've hit version 0.02 wih a successful hash-table implementation.  Next up is persistence...  And deletes.

1 So that was what the "noodle incident" was about!

2 I'm guessing for the delete it would be something along the lines of...

3 In theory, something like pets.select(status = 'rabid').delete() should work right now.  I'll add a test to the module to make sure.

Also, you can't call pets.delete() when you meant pet.delete - it would instantly wipe the entire view, so I made that an error.

6 I hope you wouldn't mind if i add some criticism to your interaction design. So, why do you need that .new() ? I prefer a bit more organized approach: cat = Oodles(...) or class Pet(Oodles): pass cat = Pet(...) so, why that Rubish .new() ? And I didn't get, why you need .new() and .append(); Also nobody will remember if they need to use .find or .select. Django uses .filter() and .get() names for purpose.

7 Yuri - thanks, I'm definitely open to suggestions on the method calls.  This was the result of one evening's work, and I'm sure I'll reorganise things as the codebase builds up.  (Which is starting to happen.)

The structure of the database is not fixed at compile time.  You can create new views on the fly - and this is the normal way to do things.  It's not an OODBMS, it's a document database.  That's why I'm not subclassing to build the individual views.

Now, as to the .new() - you have a good point here with regards to expected Pythonicity.  But what I'm doing is saying pets = Oodle() to create a collection of pets, and pet = pets.new() to create an item in that collection, not an instance of pets.

I'm using the idiom for pet in pets(species = 'wombat'): ... to iterate over the collection, which would conflict with pet = pets() to create a new item.

I can use .filter() and .get() in place of .select() and .find().  (In fact, select is now redundant.)  I haven't worked out the syntax for range matches and full-text searches / regex scans yet, so there's room for some changes there.  The difference between the two is that .select() returns a generator, where .find() returns a record.

Come to think of it, I need to redo them to insert Jy and Pi.  So there may be another colour shift coming.

2 Fools!  That table's not periodic!

That list above is the mee.whatever domains I own.  I missed out on mee.tv by a couple of weeks.

I need to add icons for the components of Minx - Minx itself, Meta, the templating language, Miko, the desktop client, Pita, the database wrapper, and Jsyn, the syndication and replication protocol.  Oh, and Mili and Mepi, the scripting language and API respectively.

Maybe I could make those round...

1 That's fantastic. I want to see the rest of it.

2 Mina Smith?  Am I missing a reference?

It kind of reminds me of H. Beam  Piper's Paratime Police stuff.  Not bad at all.

You wrote this the same week you were trying to write your own SQL language?  The Handicapper General's gonna come get you if you're not careful, Harrison.

3 I haven't actually read any Piper in decades.  I'm sure there's a germ of an idea or three borrowed from there, as well as the whirling SF cosmos in general.  Mina Smith is the protagonist in the original (similarly fragmentary and unpublished) stories I've set in the same universe, but earlier in the timeline, and as I indicated, a customs agent tasked to stamp out paratemporal contraband.  If she's not retired by this point, she's probably a very senior figure in the Agency.

There's an awful lot that our accountant friend doesn't know, for all his advanced tech.

It's not a SQL language, though, just a programmatic database with some nice query-by-example features.  Intentionally not Turing-complete.  Though of course every protocol evolves until it is...

I can't configure a server on your site with more than 4GB of RAM or SATA drives bigger than 250GB.  Last time I checked it was not 2002, so could you please FIX IT?

Okay, quick, tell me what language this is (without Googling the source code):

Hint: That's not it.  And I don't understand the first line of print_sieve at all.  Oh, right.  Logically, (sieve, j) = ({}, 2), so the local variables sieve and j are initialised as an empty dict and 2, respectively.

Hint the second: It's the same language as this (believe it or not):

Which implements the exact same function.

Hint the third: You'll be able to script your mee.nu blog like this soon.

I was looking at YAML as a serialisation option for Pita (it's already supported for exporting data in the development version of Minx).

So I ran some benchmarks.

Here we are, encoding and decoding a 2k record:

json is Python's built-in JSON library, which is written in Python and thus somewhat sluggish.  simplejson is the same JSON library with an optional C implementation.  Essentially the same applies for pickle vs. cPickle.

yaml is PyYAML, which includes a C implemenation if you have LibYAML installed.  Which I do, but I can't seem to get the C implemenation to run...  Unless that's it, which would be pretty sad.

On the one hand, simplejson is the fastest of these options, which is good because it's also the most widely supported format and the easiest to parse.

One the other hand, 20,000 records per second is not all that much.

have a look at yajl: http://lloyd.github.com/yajl/
it is one of the fastest json parsers / encoders out there. not sure if there are any python bindings, though ...

2 Thanks for the tip!  And yes, there's a Python binding.

Announcing Jsyn, the JSON syndication format for blogs and everything else.

1. Put a bunch of stuff in a data structure.
2. JSON-encode it.
3. Make it available somehow.

What, you need more of a spec?  But I've registered a domain and everything!

* Which is part of the Minx project**, which is part of the make-Pixy-rich-or-drive-him-insane-either-is-fine project.
** I've subdivided Minx into three parts, like Gaul, only with less garlic: Minx, the bliki; Meta, the template, formatting, and scripting engine; and Pita, the database engine/abstraction layer.  In addition, there's Miko, the planned desktop client.

Now where the heck was I, before being buried under an avalanche of poorly-considered Atom feeds and Chinese replica watch spam?

We can't do a full Progress-style where clause in Python, unfortunately.  Or not without more trickery than I intend to apply; someone did make a working goto - never mind that, a working comefrom - but I'm not inclined to go to that sort of length.

So.  I want the first 20 posts in a given folder of a given blog, sorted by date order (descending, of course).  Pythonically.  No SQL.  Let's see:

I've connected to the Pita server and have a view open.  Now:

That's not bad.  With Python's named parameters, you can use any field in a flat record structure, so:

If we have a nested structure, though, it doesn't work.  Python doesn't let you say:

even if we have the code to automatically resolve the relation.  It's not valid syntax.  So that's one place where it breaks down.  Another place is ranges; we can say

for author in authors(country = 'Australia')

to get a list of authors who live in Australia, but we can't say

for author in authors('Andorra' < country < 'Azerbaijan')

even though that is a valid Python expression.  It will get evaluated, and we'll just pass either True or False to authors() (or throw an exception), and it just won't work.

Now, the design of Pita is that it's primarly a document database with advisory schemas.  It's not schemaless like many or the key-value stores, and it's not fixed-schema like most traditional relational databases.  Each view has a schema, which specifies what fields should be there, and if they are, what type they should be.  Fields can be missing, in which case the schema may specify a default value.  And you can stick in whatever additional data you want, so long as the schema doesn't specifically conflict with that.

What this means is that we can know that country is a string, and if we do an equality comparison between a string and a list, we mean that we want to know if the string is in the list.  So we can also do this:

to get authors from any of those countries.

By returning a generator or iterator, we can efficiently replace this:

with the more Pythonic

Slicing (as it is called) is very general in Python and very useful, so adapting it to database selects will come naturally.

But what about range searches?  There's no obvious Pythonic syntax for this, at least, not one that works.  Here are a few possiblities:

We know price is of type money, so we look at that string, and the leading < means it's a range match.  Goody!  Doesn't work so well - or at all, for that matter - for strings, because we could be perfectly well looking for those exact strings.

We could have an explicit range function:

That's not too bad either; it's pretty clear syntactically and semantically, and it requires no parsing.  Doesn't let you differentiate between > and >= though - and you can't do a range match on more than one field.  (You can't effectively use a binary tree for such a search anyway.)  We can still slide in our other parameters like so:

But (again due to the strictures of Python), they must come last.

Since we're building a generator, it should be possible to do this LINQish trick:

The first operation produces a view that knows to search on the suburb field for Wondabyne.  This derived view has the exact same attributes of the original view, and price is one of those attributes, and we can use the range selector on price just like before.

We should be able to keep doing that sort of thing, until we get something like:

But it's not terribly dynamic.  So, next stop, dynamism.