Some Of Us Have No Spare Time At All

While others seem to have too much...

My mind, it is blown. (Oh, and I sort of wish I'd gotten around to dabbling in stop-mo'.)

3 I took some time to make my own little video this morning. Looks like I got my very first Youtube hit on my hands!! 52 seconds of pure bliss.

Hillary - Going Out of Business
http://www.youtube.com/watch?v=XH0oJzT9WIg

Wow, really too much spare time. What are the figures used for the Haruhi one?

Things That Make You Go Oops

I'm busy tweaking the mu.nu->Minx syncromatic dimensional portaliser for increased efficiency.  I want to run it at frequent intervals to update the Minx versions of the blogs in as close to real-time as possible.  (Given that the two systems have entirely different database structures and all, so simple replication is out of the question.)

Another major problem is with spammers: The program checks any post updated in the last two days.  That includes any post hit by spam, which is a lot more than the number of posts with valid updates or comments.  That one's harder to fix, but I can tweak it a little.

Update: And if you set the post status wrong, you don't see anything.

Update: Okay, that's got it.  Sort of.  Need to populate the user mapping table, and there's something weird going on with categories.  But apart from that, um, and checking that it's auto-generating the banners properly, it looks like it's working.

Update: Bleh.  Categories still playing up.  That will have to wait until tomor...  Later today.

Update: But before I go - yep, it's generating the banners correctly.  Just my test domain playing up a little in serving the images.

hi, i was told to ask you about the text editor used here, at mee.nu... the one i am using now to write this. i understand that it is built in. but, did you get this from somewhere in the internet? is it available somewhere?

at my company we're looking for a text editor as the current one we're using is not that great and this one is much better.

thanks for any help you can provide.

you can email me here. 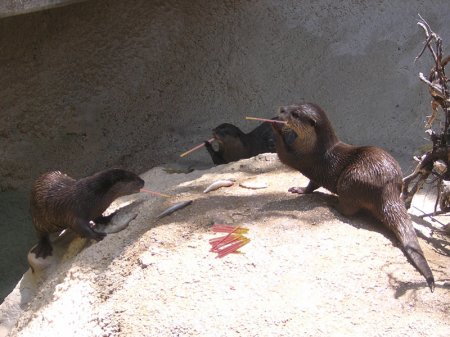 1 Seal and a penguin?

2 Pixy, sorry for OT.
We had to put a horse down.
I need a raincheck, please.

Oi! Come Back With That Idea!

There's this story idea I've been tinkering with regarding unimaginably ancient intelligent space ships that exist outside of our universe, and merely project some small part of themselves into our reality, leaving them with the ability to travel anywhere, anywhere at all.  I called them void ships.

New Doctor Who, season 2, episode 12.  I guessed what the thingy was about five seconds before the Doctor identified it - but I didn't expect them to steal my name as well as my idea!

Ah well, let's see where they go with it, since I got nowhere.

Update: Ooh, it's like a Kinder Surprise egg...  Full of scorpions... When you're knee deep in a snake pit.

1 All up Doctor Who has been great.

Its light and fun, especially with David Tennant. I miss the edge that Christopher Eccleston brought to the Doctor. I'd have liked another season of him.

Regardless I've liked how they put just enough thought into things to make it work. Wibbley wobbley timey wimey.

My all time favourite episode was Blink. More Sally Sparrow I say.

Ben Stein has lost the plot:

Stein: Love of God and compassion and empathy leads you to a very glorious place, and science leads you to killing people.

I thought he was just a lying weasel.  In fact, he's stark raving mad.

1 Here is Stein's "message" in one line.

Science is Bad...reallyreally Bad, unless there is Religion to guide it...and btw, we are JUST AS SMART as you snotty scientists that wont teach IDT in their classrooms...and anyways.....YOU'RE ALL NAZIS!"

Love of God and compassion and empathy leads you to a very glorious place, and science leads you to killing people.

3 Does this mean I can't enjoy "Ferris Bueller's Day Off" any more?

4 Well, you can always fast forward past the classroom scene and go straight on to Twist and Shout.

That's what I do.

5 i got banned at chicago boyz today.
do you now what i said?
some guy was using Liberal Fascism to defend Stein...
and
it
occurred
to
me (wait for it)

Expelled is just the cartoon version of Goldbergs Liberal Fascism.

and they banned me!
those fascists.
hehe

6 btw pixy, i sure hope you are girding your loins.
im layin in full hammerhoff and tegmark armament.

7 an ima bring my homies with me.
who's your second?
SDB?

this gonna be a theory of consciousness rumble.
there will be blood.

9 ...also punctuation, capital letters, and a hint of grammar.

is sunday ok?
im scribing for dressage at the Colorado Horse Park tommorrow.

Return Of The Stupid

Although the scientists are not finished examining their data, they have told me one thing: they’ve seen results they’ve never seen before with their equipment.

Or it could mean that with intention, we are emanating an energy like a Qigong master, which is being picked up by the spectroscopy before the event.

Or it could be that your scientists are incompetent clowns who bollixed up a simple procedure.

The scientists chose to use Raman spectroscopy because they discovered one published study showing that Qigong Grandmaster called Dr. Yan Xin significantly altered the structure of a water sample, as measured by a Raman spectrometer, when he sent his Qi from a place seven kilometers away from the water sample.

So, not because Raman spectroscopy is actually suited to the task, or they are particularly familiar with the procedure, but because someone else found a unicorn with it.

Some of the comments following the post are so stupid that I am tempted to believe that they are satirical, but my hopes have been dashed too many times for that.

1 Pixy, I tire of your denialist rejections of the truth.

If you add Ramen to your water sample you will alter the properties of that sample.

If you add the accompanying flavor packet to the sample, you will alter it even more, if the water to ramen proportionality is correct you will utterly change the physical charachteristics of the sample and that will will only be augmented with the addition of an egg, scallions and possibly some sort of meat.

This is no doubt well within the capability of a Quigon Master irregardless of weather or not you for some inexplicable (but probably bureaucratic) reason choose to conduct spectroscopy on the bowl.

I hope this clarifies things.....misterwebmaster.

2 That's the most sensible explanation for this mess that I've seen so far.

I think I'd only seen one or two episodes before now, and somehow managed to find a the only lame ones in a consistently strong series.  I went back and started from the beginning of the new series, and it's much better than my earlier impression.  Even the effects are excellent, which is most un-Doctor-Whoish.

Apparently there are plans under way to bring back Blake's 7.  If they do as good a job with that as the BBC has done with Doctor Who, I'll be there.

Update: Uh.  Except for the episodes which are really, really terrible.

I can't see it. Blakes 7 was cheesy dialogue, cheesy sets, cheesy stories, and especially cheesy acting. The appeal of Blakes 7 was that it was crummy. It was high camp.

If it gets done again, and done well, that will drain all the charm out of it.

Who knows, it might not even make it to air.  We'll see.

3 Steven, you just described the attraction of Doctor Who as well.  And yet, the remake is not half-bad.

I am now going through the first series of Torchwood - I didn't see the beginning of it on TV so when I watch some it didn't make sense - until I got the DVD's and started from the beginning.  Some parts of the story lines are a bit far fetched, but otherwise great character building and very enjoyable.  Much different from traditional Doctor Who - closer to Buffy.

5 Yep.  I watched one epsiode on TV with you - I think it was Fear Her - and it just happened to be of the few bad ones.  So I never bothered to watch any more until recently.